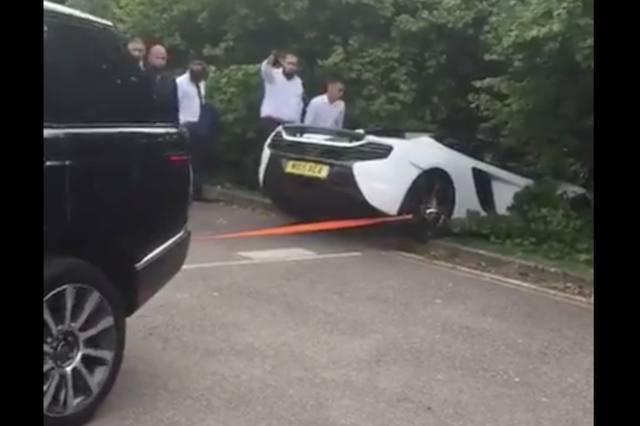 A McLaren 650S Spider smashed into a tree at a wedding reception after the driver tried to show off.

Footage filmed after the incident shows a rescue operation to retrieve the prized supercar from the undergrowth.

A Range Rover can be seen reversing into the frame while dozens of people gather round, many trying to help.

The car became embedded in a tree after the driver tried to use the launch control function in a car park, but it went horribly wrong, resulting in the near-£200,000 car being written off according to witnesses.

The car is slowly dragged out of the ditch and back into the car park, with the bodywork grinding along the tarmac.

The McLaren 650S is an immensely powerful supercar with more than 641bhp and a 0-60mph time of just 2.9 seconds – meaning it is a dangerous weapon in amateur hands.

Luckily nobody was injured in the incident.