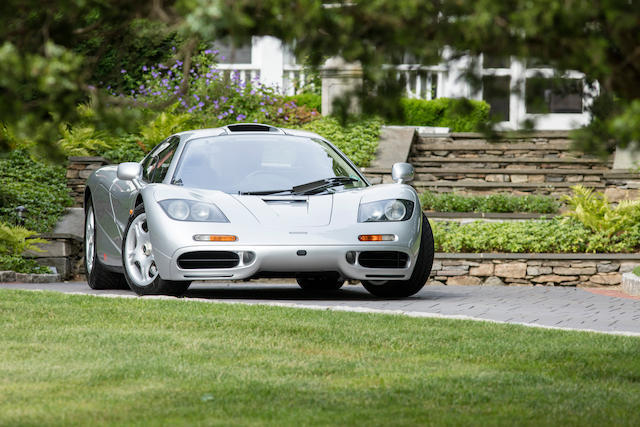 The first US road-legal McLaren F1 has sold for more than $15.6m at auction.

The F1 – chassis number 044 – was converted by Ameritech, which adapted the hypercar to make it compatible with strict US safety regulations.

First US McLaren F1 smashes auction records
Up Next

One of just 64 designated road-going versions and one of just seven that were ever legalised for road use in the US, 044 has had just one owner.

Bought new in 1996, its owner instantly took the car on a European road trip – before returning the F1 to McLaren's Woking HQ for its first service. This one road trip is said to have accounted for nearly half of the 9,600 miles the car has covered.

It was offered with its original complete tool kit, F1 literature and original luggage set, with Bonhams describing the F1 as "essentially remaining as it was when it left the factory".

The F1 was renowned for its world-beating performance, setting a record top speed of 240mph in the hands of Andy Wallace, an achievement that would last until 2005 when the Bugatti Veyron came on the scene. The F1 was also famed for its unique three-seat set-up, with the driver sitting in the middle.

It was sold by Bonhams as part of the prestigious Quail motorsports gathering near the Pebble Beach Concours d'Elegance in California.

The hammer price of $15.62m (circa £12.2m) makes it the most expensive F1 ever sold at auction, with prices spiralling in recent years.