A 1956 Aston Martin racing car, once driven by Sir Stirling Moss, has been sold at auction for £17.5 million – becoming the most expensive British car ever sold.

The DBR1 is said to be the 'most important' model in the British brand's history and this example – chassis no. DBR1/1 – was the first to be built as Aston Martin looked to conquer the Le Mans 24-hour race.

It drew a large crowd to the Monterey auction on Friday night as it had a guide price 'in excess of $20 million' (£15.5), and following a seven-minute battle the model was sold for £17.5m.

This makes it one of the top ten most expensive cars publically sold and takes the British record that was set by the 1955 Le Mans-winning Jaguar D-Type at Monterey last year – which sold for £16.9m. 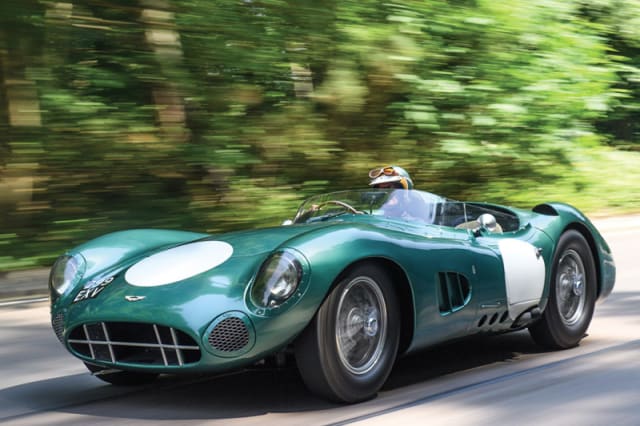 The DBR1 was purpose-built to take on Le Mans, but chassis DBR1/1 failed to finish in its only attempt at the famous endurance race because of an issue with its bearings after 240 laps.

Its only win came at the hands of Sir Stirling Moss and Jack Fairman at the 1959 Nürburgring 1000km.

Fitted with a 3.0-litre, 301bhp straight-six engine, this DBR1 is in excellent condition and has been maintained by Aston Martin specialists R.S Williams.

Despite having engine changes throughout its tenure to suit different racing categories, this is said to be the most accurate DBR1 still in existence.

Stirling Moss Aston Martin sells for £17.5 million
Up Next