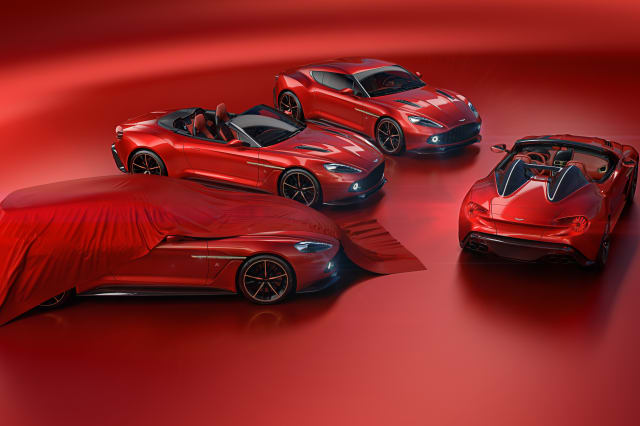 Aston Martin has announced that it will be releasing 325 special edition Zagato-designed models with four different body styles on offer as part of the 'Zagato Family'.

In partnership with the Italian design house, Aston Martin has said that the already-announced coupe will be joined by Volante, Speedster and Shooting Brake models – all of which are based on the Vanquish S.

There will be 99 editions of the Coupe, Volante and Shooting Brake models, while only 28 versions of the Speedster will be built. Both the Coupe and Volante models are already sold out as they were announced last year.

Under the bonnet all models come with the Vanquish S's 591bhp naturally-aspirated V12 and Touchtronic III eight-speed transmission, which can mean speeds up to 201mph and a 0-60mph time of under four seconds.

All models are two seaters – even the Shooting Brake – and with the base Vanquish design, Aston Martin has utilised its relationship with Zagato to create four beautifully designed models that are some of the most exclusive vehicles on sale.

The Zagato design house has been in business since 1919 and has designed some of the most beautiful cars – many of which have been special edition Aston Martins. Those include the DB4 GT Zagato, the DB7 Zagato and the V12 Zagato.


Aston Martin CEO Marek Reichman said: "Why create a family of Zagatos? Well, many of our customers want different things. Some prefer the purity of a Coupe, but others love the idea of something more extreme, like the Speedster.

"We could easily fulfill demand for more cars than this, but we want Zagato to remain something very special. We're creating collectibles, future concours cars. With only 325 cars worldwide, divided between 99 Coupes, 99 Volantes, 28 Speedsters and 99 Shooting Brakes - they are still the rarest of the rare."

Andrea Zagato, CEO of Zagato, said: "Zagato's relationship with Aston Martin began with my grandfather and the DB4 GT Zagato, almost sixty years ago. To have a creative 'marriage' thrive for three generations is something as unique as the cars themselves. Collaborating closely on the design of four complimentary, yet completely different Vanquish Zagatos has been an incredibly exciting challenge. I'm proud to continue the story my grandfather started and thrilled that our partnership with Aston Martin continues to realise such exciting cars."
Tags
Read Full Story