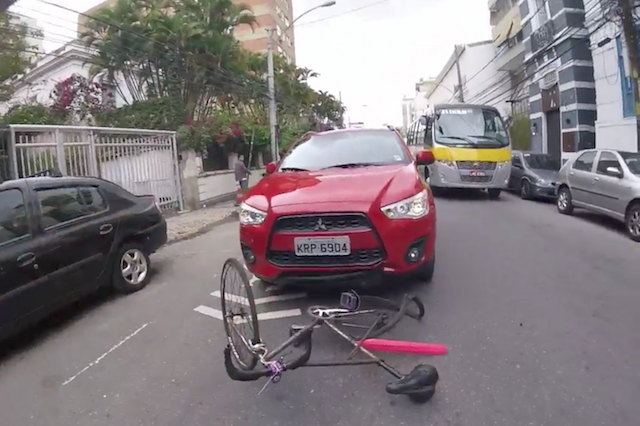 Footage has captured a shocking road rage incident between a cyclist and a motorist in Brazil.

The cyclist - who films the incident - can be seen following a red Mitsubishi ASX before overtaking it in slower moving traffic. However, when the rider begins to overtake the SUV, the driver moves into their path causing the cyclist to take evasive action and hit some cones at the side of the road – rather than the car.

The cyclist then starts shouting at the driver, only for them to drive into the bike from behind, leaving it with a bent wheel and partly underneath the Mitsubishi.

When the driver attempts to drive off, the cyclist jumps onto the bonnet of the car, only for it to start moving.

The suited driver of the car then gets out of the vehicle before they start shouting at each other, with the cyclist being assisted by several passers-by.

The cyclist commented on the video saying: "We all went to the police station shortly after."
Tags
Read Full Story