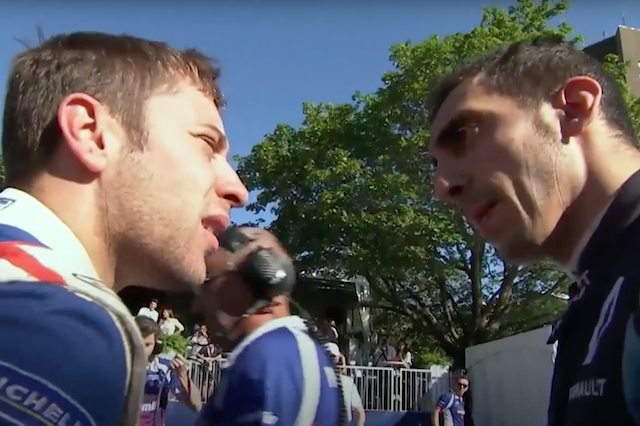 A heated exchange between Formula E Renault e.dams racing driver Sebastien Buemi and three other drivers has been caught on camera.

Buemi can be seen angrily confronting Antonio Felix Da Costa, Robert Frijns and Daniel Abt about colliding with him.

Buemi's anger spilled out into the pit lane as he argued about being hit by either De Costa or Frijns during turn two of the first lap at the Montreal ePrix.

Frijns defended his actions after admitting it was him, explaining he had a choice ofeither clipping the rear of Buemi or fully hitting the back of the car. Their argument ended with Frijns swearing at the French driver.

Buemi then moves towards Abt who he confronts about hitting his car and blocking him in the pit lane.

The two argue about the incident with Abt denying he hit Buemi. The argument culminates with Buemi walking away as he describes Abt's actions as 'dirty.'