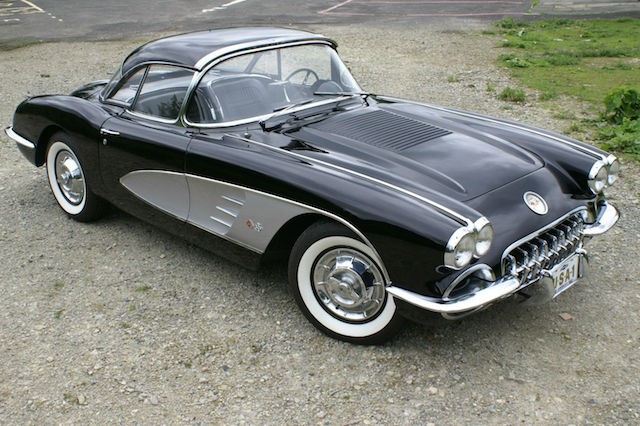 It looks stunning finished in black and silver paintwork, especially with its curved coupe looks thanks to a removable hard-top.

What makes this car so special is that it is the very first generation of the 'four headlamp' model and therefore one of the most desirable.

In 1958 only, the car came with a faux washboard-louvered bonnet, as seen in the pictures. It also has chrome spears jutting out from the trunk, again unique to that year of production. After this year they were smoothed out.

This car is also an all-matching numbers car, meaning it is totally original.

This particular example has the original engine, which looks immaculate and is finished off nicely with a chrome air filter on top of the engine. It also has the optional two-speed automatic gearbox that allows the V8 engine to rev all the way up to 8,000rpm.

The details on this car are fantastic with lots of chrome on the outside and leather on the interior. Even the exhaust pipes, which are located within the rear bumper, have chromed tips.

This car also featured in an issue of Classic Cars Magazine in February of this year and has just recently been restored by Kent-based specialist Claremont Corvette, including a full re-build of the removable hard-top roof and a new wiring loom.

The car is currently being sold by Claremont Corvette for £75,000.