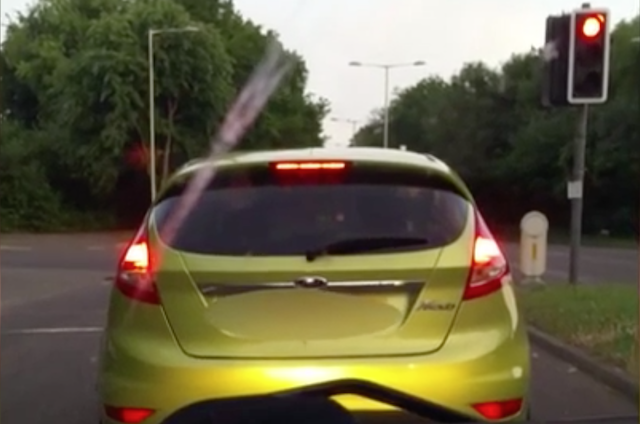 A Ford Fiesta driver was filmed swerving between lanes while watching the Champions League final on their smartphone.

The hatchback driver was caught watching the football match by fellow motorists, who filmed the misdemeanour.

The video shows the Ford driver turning out of a junction before struggling to get into the right lane because thy're distracted.

One of the motorists said: "He shouldn't even be driving at the rate that he's been driving. He was on his phone! He's watching the football on his phone!"

They then cheekily say: "Wonder what the score is."

Although the moment where the driver had the phone in his hand wasn't captured, the phone had clearly been placed on the dashboard with the game in progress.

Although it is unclear exactly where the incident took place, the footage was sent to Norfolk Constabulary and the Fiesta driver was send a letter of warning.

Earlier this year the government announced new laws about the use of mobile phones behind the wheel, with anyone caught getting six penalty points on their licence plus a £200 fine.

That can be increased to a driving ban and a maximum fine of £1,000 (£2,500 if driving a lorry or a bus), with drivers who are caught within two years of passing their driving test having their licence taken away and they would need to retake both their driving and theory tests.