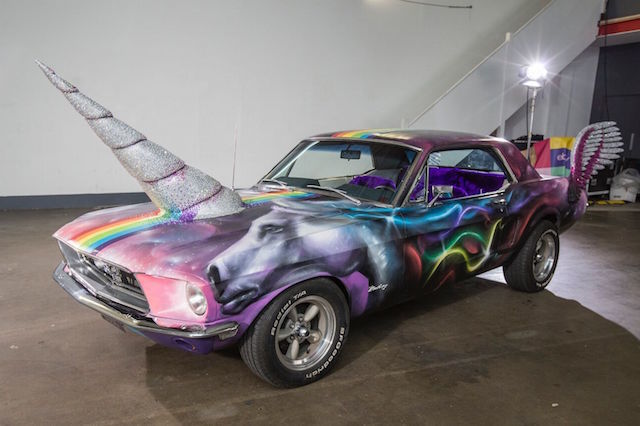 A classic Ford Mustang with a difference has gone on sale on eBay.

The unicorn-styled 1968 Mustang Coupe has been created by a skilled team of five people, who have worked on the car for the last 30 days. Fronted by mechanic Darren Sullivan Vince, the car has been designed to celebrate Pride 2017.

The car is currently online with a starting price of £10,000. Whatever the car sells for will go straight to the Albert Kennedy Trust - a charity that supports 16-25 year olds from the LGBT community who are homeless or are living in a hostile environment.

The car started life as an ordinary white Ford Mustang with blue stripes, and has been transformed into a striking unicorn, using only parts sourced from eBay.

On the outside it has been heavily customised and even sports its own horn and wings, although these can be removed. The blue stripe has been replaced with a rainbow pattern and the paintwork is a symphony of spray-painted, artistic designs that really make the car stand out from the crowd.

The interior is just as vivid with fluffy purple fur seats, and a view of that huge glittery horn that sticks out from the bonnet.

The team who carried out the modifications upgraded the rear shock absorbers and springs, installed a new radiator, hoses and water pump and customised the lettering on the rear to spell out 'unicorn'.

Speaking about the project, Sullivan Vince said: "I'm thrilled to be part of a project that celebrates diversity, and it's brilliant that eBay have chosen the Albert Kennedy Trust as their charity partner for this activity.

"I personally know friends who have been helped by this organisation during struggles in their life."

Chris Gardner of eBay, said: "It's been great to be a part of this project where the LGBT community has come together for one purpose – to create this incredible unique car and raise money for a great cause.

"The Albert Kennedy Trust is a fantastic organisation, and eBay customers will have the option to donate at check-out for the two weeks during Pride, as well as all of the proceeds from the sale of the 'unicorn' being donated to the charity."