Best of Goodwood's Festival of Speed 2017 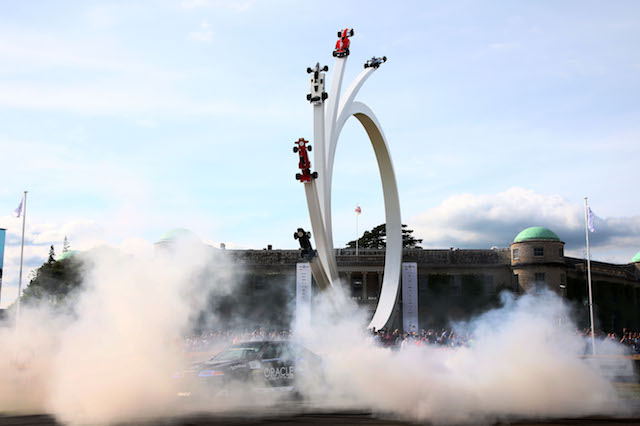 The Goodwood Festival of Speed is an opportunity not just for some very rare and fast cars to go racing around the Goodwood circuit, but also for manufacturers to show off their latest cars and delve into the history of their company.

For 2017 it was also an opportunity to celebrate someone who has been associated with racing and Formula One for most of his life – Bernie Ecclestone.

This culminated in the statue for this year being dedicated to him. Gerry Judah, who has designed the statues since the event since 1997, created a sculpture entitled 'The five ages of Ecclestone.' Here stood five different race cars from Ecclestone's life attached to the plinth consisting of five curved arms sweeping into the air.

Judah said: "Coming up with a sculpture for Goodwood is always a challenge.

"They have to be different, dynamic and dangerous, as motorsport itself. This year is no exception given we are celebrating an individual, a phenomenon, and what better way than producing a firecracker."

One of the many manufacturers to showcase some truly stunning cars was Rolls-Royce. Famed for luxury automobiles, it brought along one of its most famous creations – the one off Sweptail.

Based on the soon to be discontinued Phantom, it was a last hurrah for the car and was designed for an anonymous customer who paid an eye-watering £12.9 million for it.

Best of Goodwood's Festival of Speed 2017
Up Next

It stunned the crowds at Goodwood as it took to the hill climb to show off its magnificent custom designed body and sweeping tail - hence the name – made of glass and designed to look like a luxury yacht inside.

Rolls-Royce weren't the only company showing off their latest creations however – Mercedes-Benz also displayed some fantastic cars from the present, and some very rare classics too.

Its latest AMG GTR was on hand to wow crowds as it battled around the circuit, finished in a very vibrant 'AMG Green Hell Magno.'

From its heritage came the Mercedes W125 Silver Arrow from 1937. Powered by a 5.6-litre straight eight engine, this racing legend made its way up the hill with famous racing driver Jochen Mass at the wheel.

Another Stuttgart based manufacturer - Porsche – was on hand with its latest car the 911 GT2 RS. Although this car made an unexpected appearance at the launch of the Forza Motorpsort Xbox game last month, it was officially unveiled at Goodwood.

Get your first look at the new Porsche GT2 RS at Festival of Speed. #gwsupercars pic.twitter.com/JaLB8oXhcj

Aston Martin also unveiled its newest car. Set to be the fastest Aston Martin ever, the Vulcan AMR Pro packs a naturally aspirated 7.0-litre V12 engine which develops more than 820bhp and has a fully carbon fibre body.

Other notable features of the car are its huge rear carbon wing and bright luminescent colour scheme.

Not only is it the fastest car the company has made – only the current 24 Vulcan owners will be offered the package, making it incredibly rare and a great sight at Goodwood as it completed the hill climb in 55.62 seconds in the supercars and race cars for the road challenge.