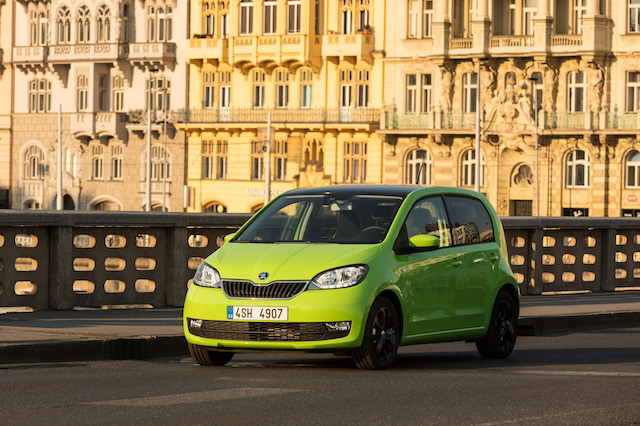 If you're in the market for a no-frills type of car, the Skoda Citigo is about as close as you can get. Urban drivers who are after a practical, yet fairly pint-sized runabout that won't cost the Earth to run are the Citigo's target market, and this latest 2017 model aims to build on the strengths of its predecessor.

There's a new aesthetic, with a redesigned front grille and bumper, as well as new daytime running lights. An eye-catching new Kiwi Green colour has also been added to the range, which certainly helps the Citigo set itself apart from the more drab whites, silvers and greys that seem to be so popular.

In the cabin, there's a new instrument cluster, and a new and improved infotainment system means controlling the DAB radio and other media functions is that much easier. An optional multifunction steering wheel is also available for even greater convenience.

There's just one engine to choose from with the Citigo, and that's a 1.0-litre petrol unit. It's available with two power outputs – 59bhp and 74bhp – and the choice of either a five-speed manual or an automatic gearbox. Though there's a more powerful 1.0-litre turbocharged unit available on the Volkswagen Up! – the Citigo's sister car – there's no talk of this being included. All cars get Electronic Stability Control as standard, while City Safe Drive that includes automatic rain-sensing wipers, among other features, is available as an optional extra.

Both outputs have the same economy figures – an impressive 68.9mpg combined – though these figures take a slight hit in the automatic version. Emissions figures are also safely under the 100g/km mark in the manual cars at 96g/km, though this rises in the autos to 103g/km CO2. In short, the Citigo is an ideal choice if you're looking for exceptionally low running costs.

The flagship Monte Carlo trim level comes with a good deal of toys, but also a fairly hefty price-tag. There's darkened privacy glass and heated seats, but at £11,325 it's a fair sum of money.

Our pick of the range would be a lower-specification Citigo, as these are more in-tune with the car's no-nonsense image. The SE model is the one we'd go for, as it offers air conditioning, rear folding seats and an infotainment system with Bluetooth connectivity for a reasonable £9,635 for the 59bhp three-door model. With its Group 2 insurance rating, it should be an attractive option for younger, first-time buyers, too.

Quite a few, in fact. There's the ever-popular Fiat 500, as well as the new Kia Picanto and Hyundai i10. Not only does the Citigo go up against these rivals, it also has to contend with other offerings from within the Volkswagen Group, such as the Seat Mii and the Volkswagen Up – which all share a platform.

With cars becoming increasingly tech-laden with semi-autonomous features and the like, driving the Citigo is a pleasingly refreshing experience. The car is mechanically identical to its predecessor, meaning it retains its fun and entertaining driving characteristics. While the steering is light, it's also communicative, and the five-speed manual transmission is satisfying to use. You do need to work the engine hard to get the most out of it – especially on steep hills – but at regular speeds it's smooth and refined. This is certainly not something that can be said of all three-cylinder power plants.

So, while the Citigo provides a basic behind the wheel experience, it's by no means a dull car to drive. If you're in the market that's a bit more capable over long distances, we'd go for the more powerful engine.

The Citigo was always a wonderfully down to earth city car with plenty of character to match its excellent build quality and fuel economy. The new car has only added to that, and it makes a strong case for itself more than ever.

First Drive: Skoda Citigo
Up Next