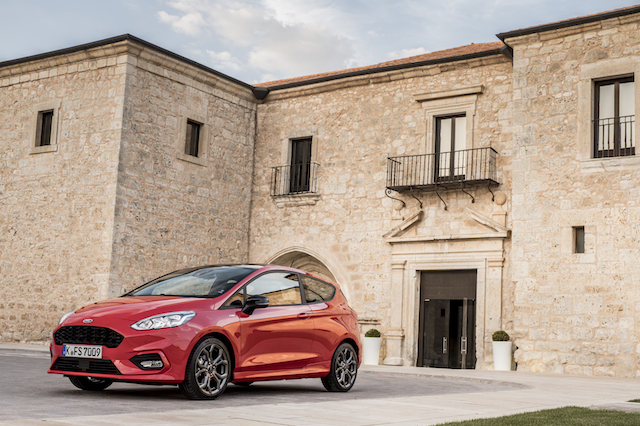 You'd be hard-pressed to argue against the idea that new Ford Fiesta is the most important car of 2017. The supermini has been the best-selling model in the UK since 2009, and has been a constant fixture in the top 10 since the original first-generation Fiesta was launched back in 1976.

However, the Fiesta's dominance may not be so certain – with demand for more upmarket rivals such as the Audi A1 and DS 3 growing. In order to counter this, the Blue Oval has made the new Fiesta the most luxurious yet. There's a plethora of clever new technology, while a flagship Vignale model will push the supermini's price to £19,345 in its cheapest configuration.

There are three engines in various states of tune – turbocharged 1.0-litre petrol and 1.5-litre diesels from the previous Fiesta, and a 1.1-litre petrol for entry-level cars. New to Fiesta is the 1.1-litre, replacing the non-turbocharged 1.0-litre from the previous model, along with a 118bhp version of the 1.5-litre diesel borrowed from other Ford models.

For the first time ever in a non-ST model, the Fiesta gets a six-speed gearbox too. All 1.0-litre petrols have been given a newly designed, super-efficient six-speed transmission, while the higher-powered 118bhp diesel borrows a different six-speed gearbox from the previous Fiesta ST. Meanwhile, 1.1-litre models have to make do with a five-speed manual, and the only automatic option is a six-speed on the 1.0-litre 98bhp model.

While Ford might be angling the Fiesta as a more premium offering – especially the Vignale model – the rest of the line-up don't see prices jump too much when compared with the outgoing mode. In fact, a three-door Zetec with a 98bhp, 1.0-litre EcoBoost engine actually costs £120 less than the equivalent older model, even though there's more kit as standard.

The options list is now even longer, although many are the reserve of the higher-specification models. If you want keyless entry, you'll have to go for a Titanium model. However, Titanium X and Vignale cars gain this as standard.

Ford's latest SYNC 3 comes as standard on all Fiesta models apart from the entry-level Style trim. That said, you'll be required to fork out a bit of extra cash if you want the larger eight-inch touchscreen as opposed to the standard 6.5-inch unit. Style is the only trim level that doesn't get DAB radio as standard, while satellite navigation appears on Titanium cars and above, and is a £300 option on Zetec an ST-line cars.

There's also a new optional sound system courtesy of B&O Play, an off-shoot of Bang & Olufsen. This adds 10 speakers as opposed to the standard six, as well as a sub-woofer in the boot. While it may not be in the same league as the Bang & Olufsen system in an Audi Q7, it's well worth the £300 asking price.

The Fiesta finds itself up against a huge number of rivals, in one of the most competitive segments around. Not only does it go head-to-head with the likes of the Vauxhall Corsa, Volkswagen Polo and Citroen C3, the introduction of the new Vignale model now sees it square up against more premium rivals such as the Audi A1, Mini Hatch and DS 3.

Until the ST hot hatchback model arrives, the ST-Line with a 1.0-litre 138bhp engine is the sportiest Fiesta available. The EcoBoost engine is just as character ful and run to rev as always, but now makes use of a very healthy 180Nm of torque at just 1,500rpm.

The ST-Line strikes a perfect balance between fun, sporty driving and everyday usability. You will notice imperfections in the road surface more than in other trim levels, but the reduction in body roll and the uprated power surface make the trade-off incredibly worthwhile.

The driving position is also bang on – which is a welcome surprise from a Ford. There's a generous amount of adjustability in the seat, which makes getting comfortable that much easier. An optional park assist system can also guide the Fiesta in and out of parallel and perpendicular parking bays – although the driver will still have to operate the accelerator, gearbox and brake.

As an overall package the Fiesta is as impressive as ever – a practical, affordable small car that's more fun to drive than it really ought to be. Refinement is better than before too, with the Fiesta now even easier to live with day-to-day. Interior quality isn't far off that of premium-badged rivals, and it's full to the brim with up-to-date technology too. Put simply, there's never been a better time to buy a Fiesta.

First Drive: Ford Fiesta
Up Next