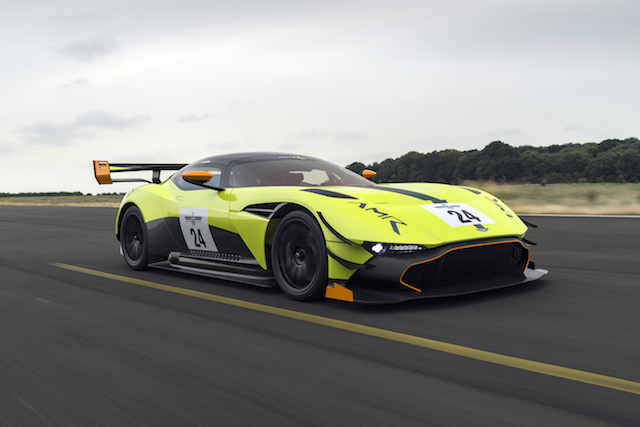 Aston Martin has lifted the lid on its fastest car ever.

Designed as a track only car, the Vulcan AMR Pro will be limited to a run of just 24 cars.

Several changes have been made in comparison to the standard road-going Vulcan, including weight reduction – making the engine cover put of carbon fibre for example has saved over 5kg.

Aerodynamic optimisation has played a key part in the car's creation however, with a larger wing pushing down the car at the rear and a splitter pulling the front down so that it hunkers more to the road at speed. A smattering of other body modifications has also helped.

The combined effect of these aerodynamic changes means that down force has risen from 3104Nm to a staggering 4000Nm. In turn this will improve traction and give greater steering response.

"The result was an ultimate track car - one free from the regulations and constraints of World Championship competition. A flight of fantasy, if you like.

"And so the Aston Martin Vulcan AMR Pro was born. The shorter gearing makes for truly explosive acceleration between the corners, while the aero package's increased down force and improved balance gives our customers the all-important confidence to explore the extraordinary performance on offer."

The Aston Martin Vulcan AMR Pro is a package that can be specified by customers to improve the car, and will be fitted by the company's Q division. The first completed cars will be ready for customers by Autumn, with the car making its first public debut at Goodwood's Festival of Speed earlier today.

These technologies could appear in your next car

Driverless vehicles are being tested for the first time in Britain