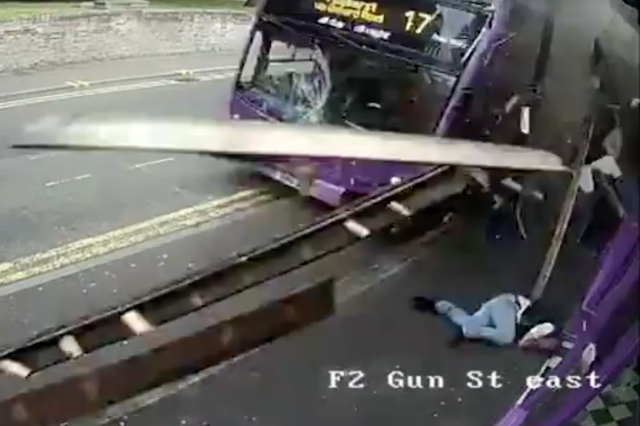 This is the astonishing moment a bus ploughs into a pedestrian who gets up unscathed.

What's even more amazing is that he then casually walks into the pub he was going towards.

The incident happened in Gun Street, Reading after a double decker bus lost control on a bend and collided not just with the pedestrian but also with a building.

Simon Smith, 53, was sent flying after the bus mounted the pavement hitting him and knocking him to the ground. The video shows lots of debris falling from the building before the bus comes to a halt.

Miraculously Smith walked away into the pub with just minor cuts and bruises, baffling paramedics and police who did not believe at first that he had been hit by the vehicle but the falling debris. It was only when they examined the CCTV footage that they realised just how lucky Smith's escape had been.

Thames Valley police spoke to the Guardian, explaining that nobody had been arrested following the incident, which saw the road closed for two hours.