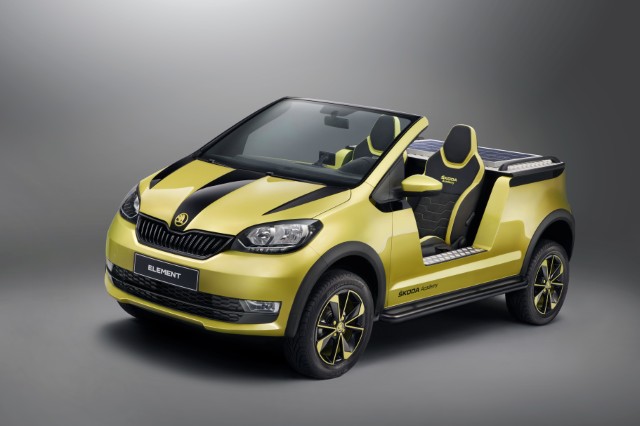 Skoda has created its idea of a student car, and it looks very futuristic.

Called the Element, it is designed to showcase what Skoda can do and how it feels a student-based market would want a car to look.

Skoda unveils student car
Up Next

Although not a production car, the two-seater is based on the current Skoda Citigo and resembles a beach buggy, with the bodywork being completely changed by Skoda's design team.

There is funky styling on the outside with a lurid yellow paint scheme and silver accenting around both the front and rear bumper.

There are no doors and no roof, but a solar panel has been added onto the rear and the ride height has been increased by 60mm.

The main change, however, is the engine. Instead of a petrol or diesel unit, these have been replaced with a fully electric motor that powers the car with more than 81bhp on tap and 210Nm of torque. It can go from 0 to 60mph in 12.8 seconds and onto a top speed of 81mph, meaning it's fast enough for any student.

The range of the lithium batteries is just under 100 miles on one charge.

Inside there are bucket seats covered in leather and Alcantara. In the boot though is a hidden surprise – a full-sized smart TV with two speakers behind each seat and two in the boot alongside the TV. According to Skoda these 'turn it into a 400kilowatt beach club on wheels.'

Although this isn't a car that will go into production, it may be something that Skoda focuses its attention on in the future.