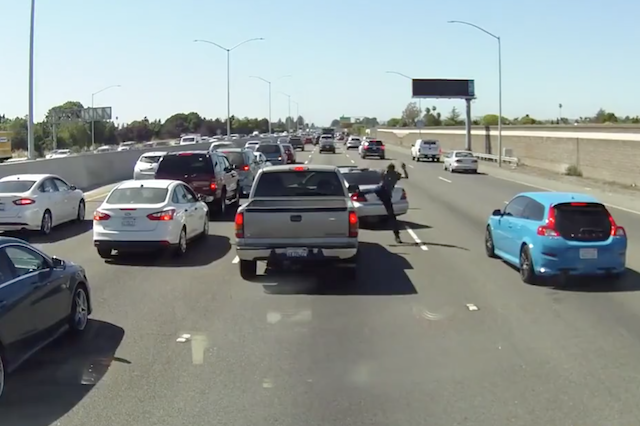 Two motorists have been caught on camera during a bizarre road rage incident.

A silver Mercedes E-Class can be seen attempting to force a Chevrolet pickup driver out of the way as they merge onto a five-lane highway in the USA. The truck driver responds by stubbornly not allowing the Mercedes in line.

The Mercedes driver becomes very aggressive and attempts several times to force his way in, almost causing a collision between the two vehicles.

After some time driving down the hard shoulder, the Mercedes finally merges after the pickup moves away from him.

The Mercedes driver takes the infantile behaviour further still, pushing in front of the Chevrolet and forcing him to stop before leaping out of the car and attacking first the glass with his elbow and then kicking the door.

After retreating back to his car, the Mercedes driver is seen sharply veering right into a lane before overtaking another motorist in an erratic manner.

The footage was captured on the dashcam of a lorry driver who was also stuck in traffic, and witnessed the entire incident.