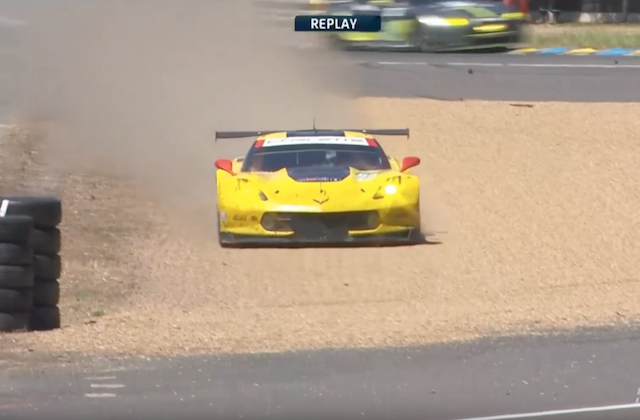 This year's Le Mans 24 Hour was one of the toughest in history, as the majority of the top-tier LMP1 class retired from the race.

However, even after a full day of racing, there was drama to be had further back in the field.

Jordan Taylor was leading the LM GTE Pro class in the number 63 Corvette C7.R but had the number 97 Aston Martin Vantage of Jonny Adam hot on his heels.

With minutes of the race to go, Adam overtook Taylor, but locked up his brakes and the Corvette managed to get back past into first.

However, with two and a half minutes remaining, Taylor cracked under the pressure and went straight across the gravel at a chicane. He retained the lead but had damaged the front bumper, which soon lead to a puncture.

On the final lap both Adam's Aston Martin and the number 67 Ford GT managed to get past the slowing Corvette and Taylor's team had to settle for third place.