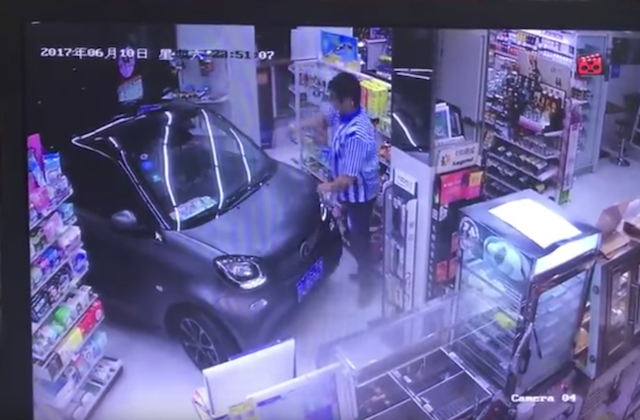 The incredible moment a motorist drove into a store to pick up a few items has been caught on CCTV.

Video captured at a small convenience store in Zhenjiang, China, shows a Smart Fortwo driver slowly edge the nose of the car through the front doors.

They then honk the horn to get the attention of the cashier, who appears shocked and runs to the driver's window.

Incredibly, the motorist then asks the man to grab a couple of items, which he does before running them through the till. The store worker then returns to the car and appears to take money from the driver.

He then walks around to the front of the car as the motorist reverses out of the store.

People's Daily China reports that local media spoke to the cashier, who said he believed the driver didn't want to get out of the car because it was raining.

Modern cars are so big they’re making parking a nightmare