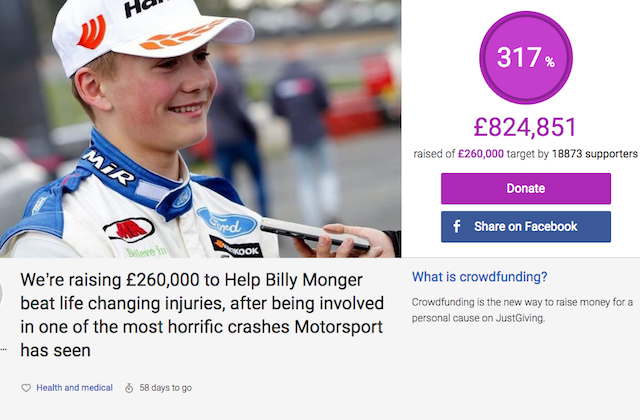 Billy Monger, the British teenager who lost both his legs in a horrific motorsport crash earlier this year, is set to return to racing in November.

Soon after the crash the 18-year-old vowed to race again, and has been spotted testing at the Carlin Racing simulator in Surrey as he learns how to drive with hand controls.

According to motorsport magazine Autosport, Monger will be competing in the season-closing race of the VdeV Endurance Proto Series. He will be driving a specially adapted car and hopes to begin testing it as soon as possible.

He'll be joining quadruple amputee Frederic Sausset, who is targeting having a disabled team at the Le Mans 24 Hour race in 2020.

Sausset has started a racing academy for disabled drivers and says that while Monger is the first driver to sign up, others will be able to apply throughout the rest of the year.

Monger was injured in a Formula 4 crash at Donington Park, England, in April. He crashed into a stationary vehicle at high speed and was airlifted to hospital.

A fundraising account set up in his name currently sits at £824,851 after a number of Formula 1 stars, including Jenson Button and Lewis Hamilton, pledged their support. Zak Brown, chief executive of Woking-based McLaren, said that his team had been in touch with Monger and had made a donation.