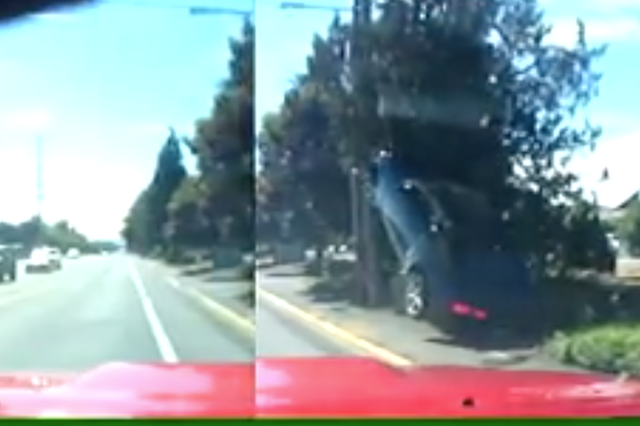 This is the moment a driver being served some instant karma was caught on dashcam.

Mike Mathews had been driving along without incident on June 2, when suddenly a Chevrolet Camaro driver began driving erratically in front of him – brake checking him more than three times.

The Camaro driver can also be seen accelerating hard and speeding, almost causing an accident with a truck pulling out of a parking lot.

While turning left at a junction, the Camaro driver is suddenly schooled in the laws of physics. He accelerates too hard, and loses control of the car.

The crash quickly ends with him mounting the pavement and ramming the Camaro up a telegraph pole. There is even a bizarre moment where the driver attempts to reverse the car, despite it being obviously wedged.

On Facebook, Mathews captioned the video with: "I knew the dash cam would pay dividends someday. Today I get to share my rewards with you."