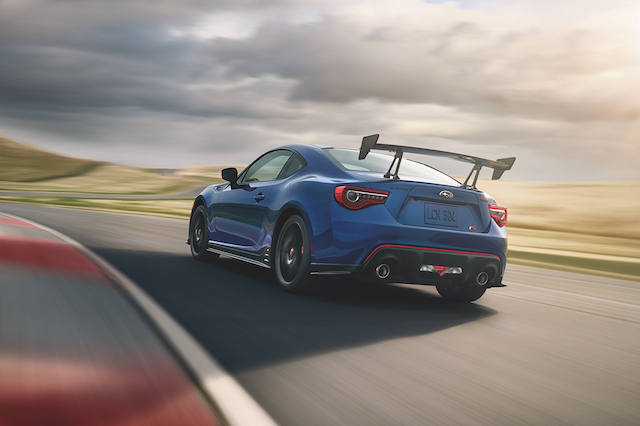 Good news for Subaru fans in the United States – there's a new, hardcore version of the popular BRZ sports car on its way.

Dubbed the BRZ tS (which stands for Tuned by STI), the new model "delivers the highest level of 'fun to drive' and 'pure handling delight' through greater flexibility, better control and stability", says Subaru.

The BRZ tS benefits from STI-tuned front and rear dampers, coil springs and V-braces, while new draw stiffeners have been fitted to the chassis and sub-frame to improve steering response.

For the first time, the BRZ has been fitted with 18-inch alloys in the form of lightweight STI wheels that are wrapped in Michelin Pilot Sport 4 tires. Brembo brakes on each wheel also improves the BRZ's stopping power.

The tuned sports car also gains a far more aggressive exterior – with the large adjustable rear spoiler being the most eye-catching addition. The BRZ tS also benefits from an all new body kit to improve airflow.

In the cabin, there's black leather and Alcantara upholstery with contrast red stitching, as well as contrasting red accents on the steering wheel, door and dash panels to name but a few. The seatbacks have been embroidered with the tS logo, while red front seatbelts and seat bolsters stand out against the black upholstery.

While the BRZ tS has benefitted from a wide range of aerodynamic tweaks, there has been no boost in power. This means the 2.0-litre four-cylinder boxer engine remains, producing 197bhp.

Pricing will be announced later this year, with deliveries beginning early next year.

There's also a new WRX on the way, called the WRX STI Type RA – which stands for Record Attempt.

This model will be powered by a 2.5-litre boxer engine, which produces 306bhp. Extensive aerodynamic and mechanical tweaks have been implemented to dramatically improve the car's handling.

Only 500 examples will be made, and a special race model – dubbed the WRX STI Type RA NBR Special will attempt an as yet unspecified Nurburgring speed record this summer.

Subaru announces new BRZ tS for the United States
Up Next