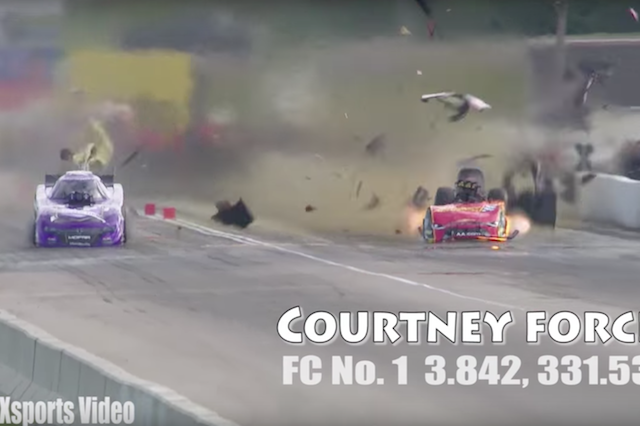 A drag racing driver was fortunate to walk away from this scary incident where the engine on their car exploded at over 300mph.

Courtney Force was taking part in qualifying for the National Hot Rod Association (NHRA) New England Nationals competition, when the 10,000bhp engine blew up at the end of her first run.

The force of the blast took most of the bodywork off and sent her Chevrolet Camaro into the wall, but thankfully Force was able to exit the vehicle when it came to a halt. Amazingly, the 28-year-old suffered no injuries.

Didn't expect to be driving a @teamchevy convertible at 330mph after my fuel line burst during Q1. 🔥But we got the #1 qualifying spot for our @advanceautoparts team and looking forward to tmrw! #ChevyConvertible #JustAnotherDayInTheOffice #Fireball #SheWentBoom #INeverSawElvisAtAThousandFeet #GreatBallsOfFire 🔥🔥☄️ #Repost @nhra (@get_repost) ・・・ @courtneyforce walked away from this HUGE explosion and took the top spot in Q1 at the #NewEnglandNats! Can she hold onto it? WATCH Q2 on @fs1 following the NASCAR Truck Series. #NHRAonFOX

Following the incident, Force told the NHRA: "As soon as I went to hit my parachutes, that's when there was just a huge explosion in my lap, and I was just trying to get the car shut off.

"I was driving a Chevy convertible. I couldn't really do anything but just try to get the car stopped, so I was on the brakes, just trying to slide it down the wall and just try and get out of the car as soon as I could. I was just happy to get out of the car and get away from it."

In that run, Force set the fastest run of that qualifying session, recording a time of 3.842 seconds at 331.53mph.

How can I get my car winter-ready?