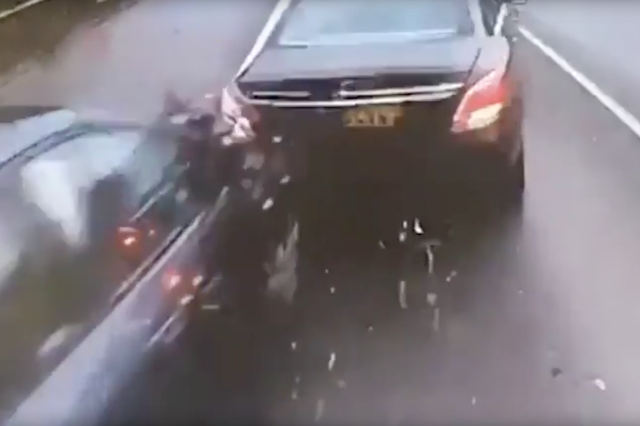 This is the terrifying moment an articulated lorry ploughed into the back of stationary traffic.

The video was captured on the dashcam of the HGV as it travelled along the M11 motorway in Essex on May 17.

The incident happened between junctions six and seven of the busy road, with the lorry taking out three cars – including a Mercedes saloon, a Mazda hatchback and a Kia SUV.

The footage shows the lorry travelling at speed towards stationary traffic when it hits the Kia and forces it across the carriageway.

It continues forwards and smashes into the Mazda before taking out the Mercedes – both also being forced in different directions across the lanes.

PC Mike Bignell, an officer for the Essex roads policing unit, uploaded the footage to Twitter, commenting: "This is why J7 to J6 was closed for so long. The HGV did not brake prior to the first impact.

"Luckily nobody was killed. Imagine if all the cars were stationary."

According to The Sun, the post has since been removed from Twitter. The newspaper also reported that a spokesperson for Essex police confirmed that a 41-year-old man had been reported for careless driving, and that enquiries were ongoing.