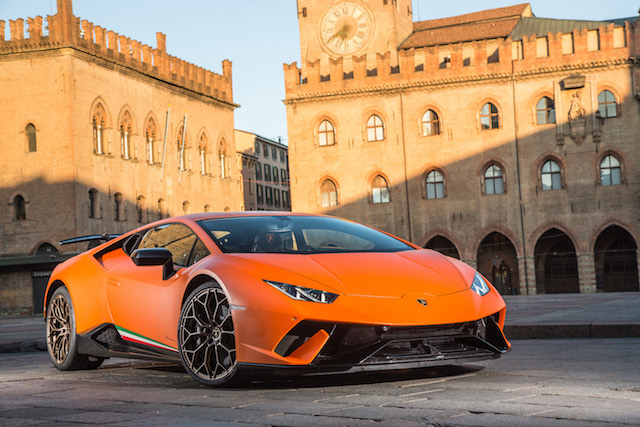 We take the all-new Lamborghini Huracan Performante around the famous Imola race track and into the Italian hills to see what this bright orange supercar is all about.

The Performante is based on the seriously super-quick Huracan supercar, but in order to make it capable of astonishing lap times – it recently broke the production car record at the Nurburgring in Germany – the Raging Bull brand has gone all out on its latest performance version.

For a start there's lots of weight saving. The Performante is down 40kg on the standard car, with the redesigned exhaust system contributing a large chunk of that.

However, the impressive part is Lamborghini's next-level active aerodynamic package. Dubbed ALA – Aerodinamica Lamborghini Attiva – it manipulates the air flowing over, under and through the car to stick it to the road. In high speed corners you can definitely feel it working.

Under the glass engine hatch at the rear sits a naturally aspirated 5.2-litre V10 that's the main focal point that makes this car such a visceral experience. The noise is raw and undiluted, yet refined once it settles down.

Push the accelerator all the way down on the track, and you couldn't care less about numbers. Thewy are impressive though, especially the 631bhp and 600Nm of torque on-board, which combine with the all-wheel drive system to deliver a 0-60mph time of 2.7 seconds and a top speed of more than 200mph.

With the industry-wide shift towards turbocharging in the face of stringent emissions testing, this might be the last of the old-school naturally aspirated engines– and what a final hurrah it is.

You can't exactly call a car that costs in excess of £200,000 a bargain, especially when a Porsche 911 GT3 costs nearly £100,000 less and is simply fantastic. But if you're able to afford this sort of car in the first place, value almost becomes irrelevant – and you honestly can't put a price on the way the Performante makes you feel.

So, what do you get for your vast sum of money? Inside, there's plenty of soft Alcantara and bucket seats as standard, though 'comfort' seats can be opted for instead. The digital instrument binnacle is excellent, switching the information it shows depending on which drive mode you're in, and incorporating the sat nav seamlessly.

For those who really want to splash the cash, the company's Ad Personum personalisation programme allows near-infinite customisation.

There are some cars that compete against the Huracan Performante, although it is a select market. The Ferrari 488 GTB, Jaguar F-Type SVR and Porsche 911 GT3 RS are probably its closest rivals in terms of sheer performance and thrill-a-minute driving. The Lamborghini just seems to have the edge though – a mix of exquisite styling and that sensational singing V10 engine. Practicality wise however, the Jaguar has a good sized boot in comparison.

We tested the car at the famous Imola circuit in Italy before taking it out in to the hills surrounding the circuit. On track, the Huracan Performante feels at home, especially at such a high-speed circuit where the aerodynamic work can really be appreciated, and you can feel the car being pushed into the road by the air it's punching a hole through. It feels fantastic.

Despite the race car-like looks and violent performance, it's surprisingly forgiving on road and track. And yet it still takes concentration to get the most out of it. When you finally reach the upper limits of its performance it's a genuinely emotional experience.

There are three drive modes – Strada for relaxing drives, Sport for when you want to have a bit of fun, and Corsa for when lap times matter. In the latter, the active aerodynamics take effect, but in Sport mode the setup is a little less aggressive and the all-wheel drive system more rear-biased to make the car more agile and easier to slide.

The Lamborghini Huracan Performante is a truly special car that's certain to become a legendary Raging Bull. It takes the standard supercar's wild looks and turns the drama up to 11. And, thanks to the frankly bonkers performance, the driving experience goes up to 12.

Lamborghini told us that it has registered plenty of interest, with almost 1,000 customers already signed up meaning this year's allocation is long gone. Those customers who've gambled on the Performante driving as well as its looks suggest, will not be disappointed.

The term 'race car for the road' gets used too often, but the Lamborghini Huracan Performante is genuinely worthy of such praise.