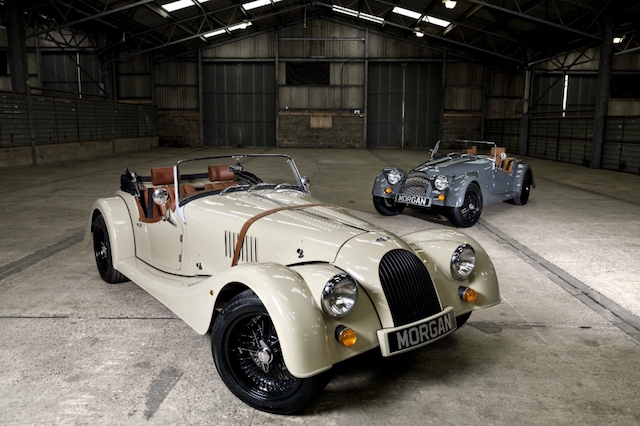 We drive a British Icon - the Morgan Roadster - to see if it still has the grin-factor.

All Morgan cars are recognisable. See one on the road, and you know exactly what it is and that it's a British name steeped in history. The sports car manufacturer, based in Malvern, has been creating cars for over a hundred years, and it has retained much of its original building techniques.

Because of this, the Roadster – which we're driving here – still uses wood throughout its chassis construction, and you'll find rudimental leaf spring suspension at the back, so its not exactly a supercar.

Powered by a 3.7-litre Ford-sourced petrol engine, the roadster produces 280bhp but weighs just 950kg dry, giving it a power-to-weight ratio of nearly 300bhp per tonne. That power is sent to the rear wheels via a six-speed manual gearbox and because there's little in the way of sound deadening, you'll get to enjoy that V6's rasping note at almost all times.

As mentioned, a 3.7-litre V6 unit, sourced from Ford, powers the Roadster. It's a sweet engine, and loves to rev. Once you've stopped pushing it on country backroads however, it settles down well, and makes the Morgan accomplished at long-distance drives.

The six-speed manual has a decent action to it, though the clutch is just a tad on the heavy side. The brakes also lack the precise feel that a modern day car has, but this just adds to the character of the car, and they do provide adequate stopping performance.

The Morgan Roadster isn't exactly bursting with technological advancements, and in truth is slightly Spartan. You do get a radio and beautifully crafted leather seats that are heated for those cold, blustery autumn drives, but that's pretty much it.

However, from the moment you sit in the cabin it's abundantly clear how much time and effort goes into the car. The leather smells amazing, and the large wood and steel Moto Lita steering wheel feels expensive.

There are some foibles however – our test car's floor carpet refused to stay in place, and we did experience a fair amount of water ingress during a shower – but these are things you just accept as part of the Morgan's character, something it has in spades and it's the reason why people are joining a year-long waiting list to get their hands on one.

The Morgan is a real marmite car – you either love it or you just can't get your head round it – but we're firmly in the first camp. There are few cars on the road right now that can leave you grinning the way the Morgan does, it does something very rare – it gets under your skin.

First Drive: Morgan Roadster
Up Next

The Morgan is a very unique car and in many ways has a niche place for itself within the market.

But if you want a fun wind in the hair experience, other cars such as the Caterham Seven which is a historic name harking back to the days of the Lotus Seven and offers lots of fun, especially with the powerful variants on offer
Other is the Aerial Atom, with its ferocious turn of speed.

With a lack of body panels though, and a boot only big enough for an umbrella, it's hardly the weekend fun car the Morgan can definitely be.

The Morgan Roadster has oodles of old-school charm and it's got a surprising amount of performance too – from a standstill to 60mph takes just 5.3 seconds – more than enough to leave hot hatch drivers far behind you.

The power-assisted steering lacks massively in precision, and there isn't a lot of feedback between driver and wheels. That said, you can still get the Morgan sweeping through country road bends with little thought. The ride is firm and if you hit a pothole a massive shockwave ricochets throughout the cabin, but for the most part it's comfortable enough.

The Roadster is never a car you feel the need to thrash. It's just perfect for cruising while the rorty exhaust chatters away behind you. Unsurprisingly, the Roadster's drive is as traditional as its looks.

The Morgan Roadster is a niche product, there's no doubt about that. It has its negatives, but the sheer amount of character and performance it has is more than enough to outweigh the drawbacks.
Tags
Read Full Story Click here to comment