Thieves smash van with hammers ... as driver sits inside 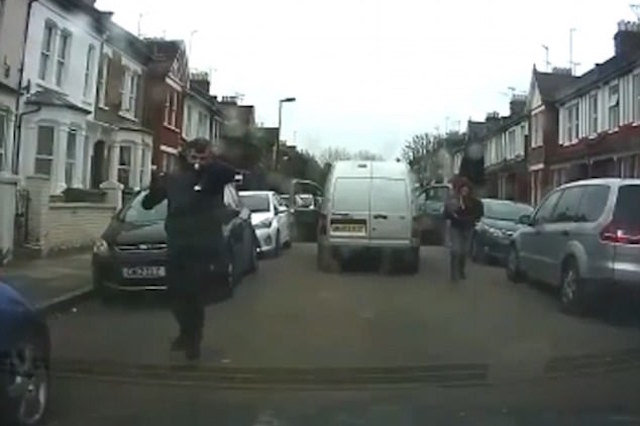 This dramatic video footage shows the moment two men smashed up a man's van with hammers - as he was sitting inside it.

Terrified driver David Grunfeld, 24, feared the men might even use the weapons to attack him but after 10 brutal blows to the windscreen, the assailants jumped back in their Ford van and sped off.

Grunfeld, who delivers audio equipment for his family firm DG Sound, was returning to his parked van when he saw two men apparently stealing equipment from his vehicle.

As the men speed off, plucky Grunfeld gives chase in his vehicle but soon regrets it as the alleged thieves jam on their brakes, jump out and start raining down blows on his van.

He told the Daily Mail: "They came out with two hammers. They started to smash my window. It was horrible. I thought they were going to smash me once the window was smashed and that they would knock me on my head.

"They started smashing my windscreen so I wouldn't be able to see them anymore or be able to chase them – and there is where it ended."

He added: "It was really, really scary, the whole chase, from one second to the next."

After the terrifying incident, the two men again get back in their van and speed off along Vartry Road.

Anyone who has any information is asked to call police on 101.