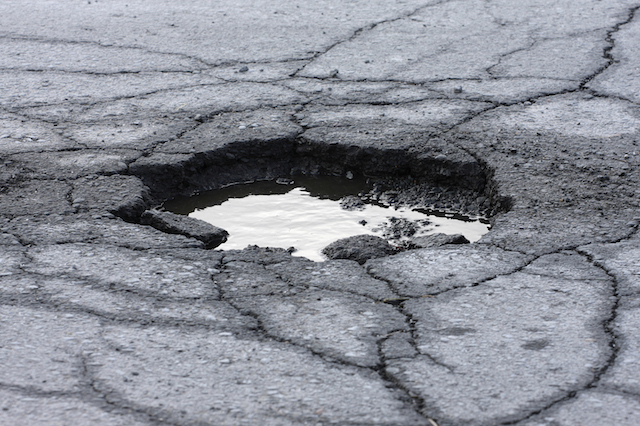 Britain's roads are on a 'knife edge' following a drastic rise in the number of pothole-related breakdowns, says the RAC.

The motoring organisation has revealed that in the first quarter of 2017 it was called out to more than 6,500 breakdowns where sub-standard road surfaces have been a factor – 63 per cent more than the same period last year.

This accounted for 2.7 per cent of all RAC call outs – the highest quarterly figure since the organisation began pothole analysis in 2006.

Damaged shock absorbers, bent wheels and broken suspension caused by the poor roads are just some of the problems the motoring organisation has dealt with.

This increase came as a surprise to the RAC, which was expecting a decline following a £1.2 billion grant from the government to local councils for road maintenance. A Pothole Action fund – worth £250 million – has also been set up to assist councils in fixing four million potholes by 2020/2021.

While there are signs that this increased funding is having some benefit on the condition of UK roads, the RAC claims they are still "well short" of the condition they were in 10 years ago.

David Bizley, the RAC's chief engineer, claims a period of severe weather would be all it took to leave roads in the poor state they were in a few years ago.

He said: "We still have a long way to go to ensure the whole road network – not just our major roads, which are enjoying one of the largest investment programmes in a generation – is really fit for purpose.

"Certainly anyone that has experienced a breakdown as a result of hitting a pothole will know just how frustrating that can be, not to say dangerous and expensive if damage to their vehicle is sustained."

An Asphalt Industry Alliance report also revealed that councils are failing to fix roads to prevent potholes from forming to begin with. It also found that councils would need £12 billion in funding to bring the UK road network up to a reasonable standard.

However, the difference between the amount councils claim they were given in the last year and what they would require to keep roads up to scratch amounts to nearly £730 million.

Bizley has called on the government to ring-fence spending on local roads, or risk leaving their condition to "the whims of the weather".