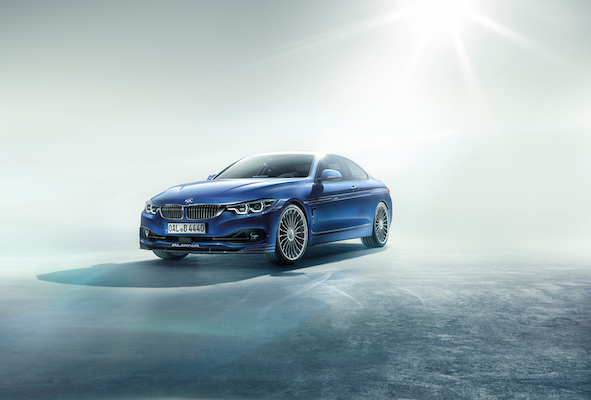 The famed BMW tuners are back and their latest bi-turbo creation looks set to increase Alpina's notoriety for producing powerful yet stylishly understated machines.

Based on the current BMW 4 Series, the Alpina B4 S Bi-Turbo features a specially tuned version of the German marque's 3.0-litre straight-six engine.

Notable updates to the powerplant include a strengthened crank casing (as well as a sturdier crankshaft), a bespoke aluminium block and the addition of an extra turbocharger that helps deliver 600Nm from just 2,000rpm all the way to 5,000rpm.

The monstrous 434bhp on tap means this sleek machine is capable of nailing the 0-62mph sprint in 3.9 seconds, aided by a laser precise ZF eight-speed automatic gearbox.

Alpina launches 'bahn-storming B4 S Bi-Turbo
Up Next


Power is also sent to the rear wheels (yes, it will do big skids), while adjustable variable dampers, stiffer anti-roll bars and a bespoke geometry setup help to keep everything in shape.

There is also a much beefier Brembo brake system to provide the much-needed stopping power.

Priced at £63,000 for the coupe and £67,000 for an electrically folding hard-top, the Alpina B4 S Bi-Turbo isn't exactly cheap but that money does buy more luxurious carpets and bespoke Alpine flourishes throughout the cabin.

Oh, and just 1,700 cars will be built each year, so there's an additional level of exclusivity should you need further cajoling into putting down a deposit.
Tags
Read Full Story