Aston Martin Vanquish Zagato Speedster could be set for 2018 arrival 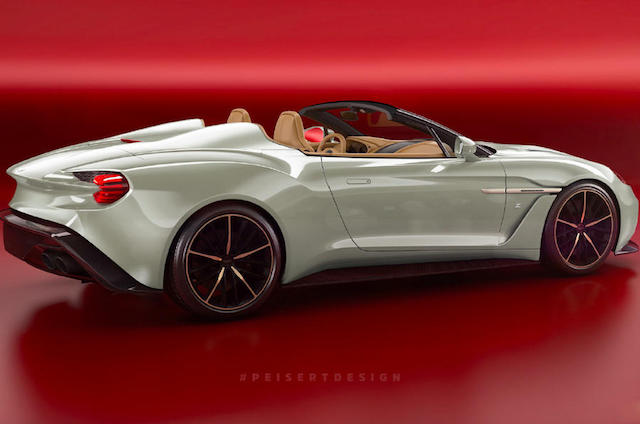 Aston Martin is set to produce a limited number of Vanquish Zagato Speedsters, which will each cost around £1.3 million.

Weekly car magazine Autocar claims the British manufacturer will build 28 examples of the Zagato Speedster – although Aston Martin is yet to confirm this officially.

According to the magazine, the Vanquish Zagato Speedster will use a naturally-aspirated 5.9-litre V12 that develops 592bhp – 27bhp more than the regular Vanquish.

The Speedster will join the Vanquish Zagato coupe and Volante models that were introduced last year.

The Speedster is differentiated from the Volante through the fact that it will be produced in smaller numbers, and that it is a two-seater.

No word has been issued on performance, although it is likely the Speedster will better the Volante's 0-60mph time of 3.7 seconds and will have a top speed of around 197mph.

Autocar claims the Vanquish Zagato Speedster will share much of its design language with the Vanquish, but will also be influenced by other models in the manufacturer's line-up – such as the Vulcan, One-77 and CC-100.

While Aston Martin hasn't issued any official word on whether it will put the latest Zagato model into production – telling Autocar "we don't comment on speculation" – an inside source told the magazine it would be produced in the fourth quarter of 2018.

Only seven of the 28 cars will make their way to Europe. Take a look at an unofficial rendering showing how the new model could look in the gallery below.