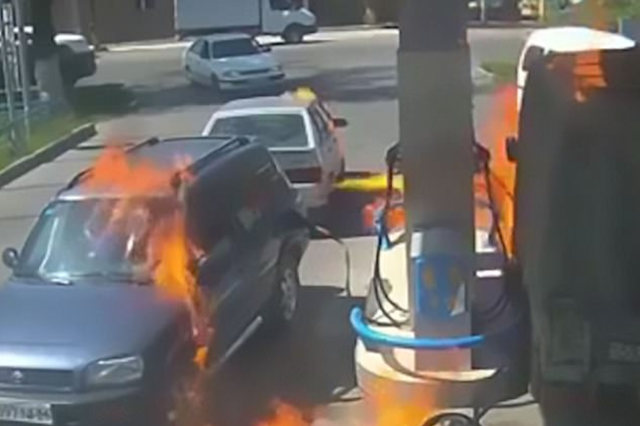 This is the stunning moment a moronic motorist set a petrol station on fire, after apparently using a lighter to check if a canister of diesel was full.

CCTV footage from the petrol station, which is located in the Kazakh city of Taraz, shows the man atop his van with the diesel fuel pump.

As he attempts to fill a canister that is mounted on the roof of his vehicle, he seems to check whether the container is full or not by sparking his lighter.

This causes a sudden explosion as the diesel ignites, which causes the man to drop the fuel nozzle in panic. Flaming diesel then sprays out over the forecourt, landing on two other cars that were parked at the petrol station.

Motorists can then be seen rushing back to their cars to leave the scene, before a cloud of white smoke – believed to be from a fire extinguisher – erupts over the forecourt.

It is unclear whether anyone was injured in the incident.