Paddleboarding in a Picanto 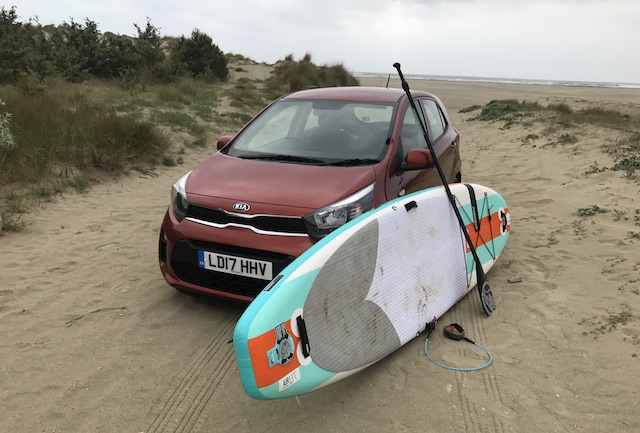 To prove just how practical its new city car can be, Kia challenged James Baggott to tackle the Italian coast on a paddleboard

It's all too easy to pigeon-hole cars like the Kia Picanto as city centre shopping karts, fit for nothing more than a quick trip to the supermarket.

While it might be true that the Korean car firm's baby has traditionally been bought by grandparents and students, it's an image the brand is desperately hoping it can shed.

Ever wondered how practical a Kia Picanto can be? This week I packed everything needed for paddleboarding into one and hit an Italian river pic.twitter.com/qSEs1ggQ1m

This is the third generation of Kia's second best-selling UK car and with it comes more aggressive looks, a sharper driving style and clever technology aimed at helping it appeal to a far broader spectrum of buyers.

Kia believes it can convince customers that while it might still be an easy and fun to drive little car, the new Picanto can still cope with the bigger adventures city dwellers might hanker for too. That's why I find myself squeezed into a wet suit, dripping with sea water after a paddle-boarding adventure on the Italian coastline.

To prove just how versatile its new Picanto can be if you want it to, Kia has invited us to the Toscana coastline, crammed two blow-up paddleboards, wet suits and a picnic in the back of one of their latest city cars and pointed us towards the coast.

Costing from just £9,450, the Picanto now boasts more passenger and luggage space but with no overall increase in size over the previous model. The Koreans have managed that by increasing the wheelbase while at the same time reducing overhangs. That means inside there's a 25 per cent increase in luggage space, topping 255 litres with the rear seats up and 1,010 litres with them down.

That extra carrying capacity certainly comes in handy. The two giant paddleboards are easily swallowed in the boot, while overnight bags for two and accessories find a home too. In fact, it's surprising just how much space there is left over.


There's a choice of engines in the new model. Our test vehicle – in '2' specification – features the 1.0-litre 66bhp unit. But there's also a 1.25-litre 83bhp option and a soon-to-be-added 1.0-litre turbocharged option. As fun as the latter sounds, even the lowest output unit hauls the city car along at a perfectly adequate rate (despite the addition of a lot of luggage), hitting 60mph in 13.8 seconds and a top speed of 100mph. What's more it'll do that while sipping fuel at a miserly 64.2mpg rate on the combined cycle.

Crossing the rich, lush green vine-covered Italian countryside near Grosseto as we attempt to find the beach, the Picanto's light steering and peppy engine impresses, as does its ability to soak up potholes you'd fear would otherwise swallow it.

As we approach the beach, the asphalt crumbles away and the Picanto skips between giant holes littering the sand-covered track to the water. The beach at Grosseto is being battered by strong winds, whipping up a swell that's enthralling kite surfers, but not particularly pleasing for paddleboarders. Thankfully a sheltered tributary that runs deep into the countryside offers far more tempting sheltered waters.

After unpacking all of the kit, it's impressive just how much has been pushed into the pleasantly practical Picanto. After an hour on the lightly rippled river, we decide to embark on some impromptu surfing in the ravaging waves lashing the beach. Despite the clouds, it's surprisingly warm beneath the white-capped surf as we fall time after time beneath the waves.

While drying off in the supportive front seats of the Kia, there's time to play with the kit. It's functional not flashy inside, and despite the smaller screen for the multimedia system on this mid-range '2', it still works well with your phone, streaming Spotify perfectly.

That small shark shaped dot is me poorly attempting to use a paddleboard to surf off the Italian coast. It went disastrously wrong (see earlier video for evidence). I blame the waves. And the sea. And the board. Obviously... #fail #surf #surfing #paddleboard #paddleboarding #coast #sea #sealife #coastal #travel #travelpics #travelgram #adventure #adventuresports #useless #italy

The latter was well demonstrated on our return trip, triggering when a sheep strayed into the middle of the road. The system automatically brakes for drivers up to speeds of 50mph to a complete stop when it sensing a crash – in this case assisting to the point where the sheep narrowly avoids becoming another statistic.

Kia has certainly moved its Picanto on leaps and bounds from its predecessor. On the road it's sharper to drive, quieter and more sporty than ever before. Its new tech – which on higher spec models even includes Apple CarPlay and Android Auto – is impressive, while it's a comfortable car to spend time in. What's more, it's always satisfying to know that even though it's a car unlikely to shed that blue rinse stereotype, if you are a more adventurous owner it can cope admirably with all the kit you'll need to escape city life.
4 PHOTOS
Paddleboarding in a Picanto
See Gallery

Paddleboarding in a Picanto
Up Next