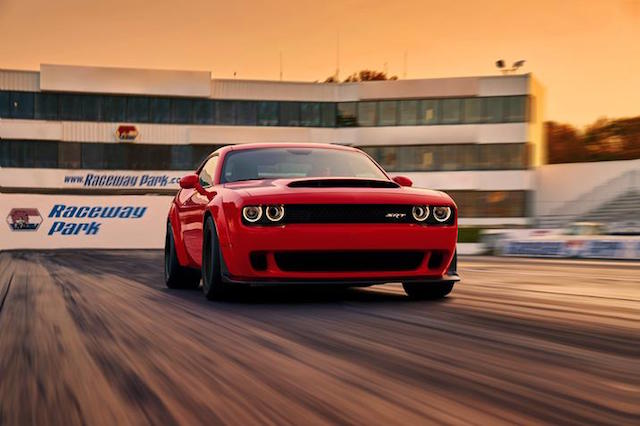 The 'hot' version of the already-rapid V8 coupe is billed as the fastest-accelerating production car in the world, sprinting from 0-60mph in around 2.3 seconds when fitted with specialist drag tyres.

It's so fast, in fact, that it set a record for the longest wheelie from a standing start by a production car.

This power comes from an 840bhp supercharged 6.2-litre V8, which grabs the title of the most powerful V8 engine ever to enter production. This unit is, in effect, the same unit you'll find in the Challenger Hellcat, but it has been heavily modified to produce such insane amounts of power.

The air cooler, for example, uses redirected air conditioning fluid to chill the air and make it even denser, while the Torque Reserve system increases engine air flow and supercharger revolutions before launch for an extra boost off the line.

Even the suspension has been tuned for drag racing, with geometry that maximises the weight transfer to the rear wheels in a bid to aid traction on full-bore starts.

It's even been reduced to a single-seater, although Dodge will sell customers the passenger seat for the princely sum of $1 (£0.80).

"With Demon, our goal was to build a car that would tattoo the Dodge logo into the subconscious of the general market, beyond even our loyal enthusiasts," said Tim Kuniskis, head of passenger cars at Dodge in North America. "To do so, we had to set records that have never been set before, do more than has ever been done before, go beyond even the legendary Hellcat. The result: an 840-horsepower, nine-second muscle car unlike anything that has ever come before it."