Understated S4 Avant could be all the car you need 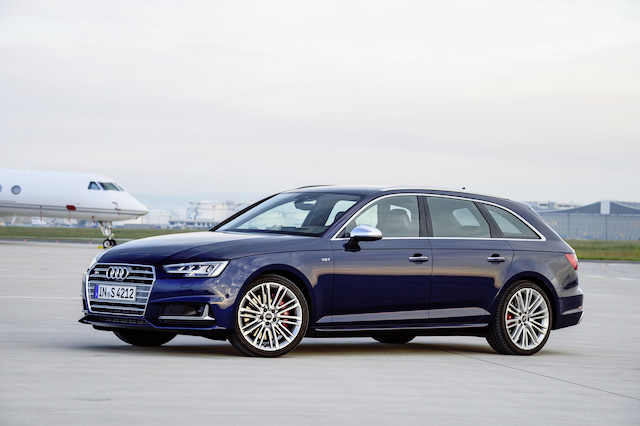 Not to be confused with the all-words-and-no-action S Line cars, Audi's go-faster S models prefer to stay quiet and understated and let the performance do the talking.

Add that attitude to a premium estate car and you should have a consummate all-rounder. We sent Jack Evans to find out whether the S4 Avant delivers.
What's new?

Although the S4 has been built with performance in mind, it isn't quite the fire-breathing beast it once was. Audi has reserved V8 power for the big-booted RS cars, and is instead fitting a 3.0-litre turbocharged V6 under the bonnet of the S4. But it still has plenty of power – 349bhp, in fact – so it hasn't slowed down.

And because all that power is fed to all four wheels via Audi's now-legendary Quattro all-wheel-drive system, it can use it all even in the depths of a damp British winter.

It isn't all about power, though. The car gets Audi's cutting-edge technology, including the optional Virtual Cockpit instrument display, and it's all beautifully built.

Audi's 3.0-litre V6 may not be as meaty as the big V8s that used to power S4s, but it's still a masterpiece of an engine.

It delivers the power rapidly but smoothly, yet it still snarls like a caged animal when you put your foot down. It packs a punch, too, sprinting to 60mph in 4.7 seconds and continuing to accelerate right up to its electronically governed top speed of 155mph.

On paper, it's relatively efficient, managing 37.7mpg on the combined cycle, but the noise and speed are just too wickedly addictive to keep economy at the front of your mind. It should top 30mpg though.

S4 Avants start at £46,500, which is a pretty chunky sum of money, and our test car's options upped that price to more than £52,000. For that sort of investment, you can drive away in some serious sports cars, but none of them are as practical, or as well-equipped as the Audi.

As standard, you get 18-inch alloys, the sporty but understated S bodykit and an 8.3-inch infotainment system with satellite navigation. You get other goodies, too, including leather upholstery and heated seats.

The only option that's really unmissable is the £250 Virtual Cockpit, which swaps the conventional analogue dials with a 12.3-inch digital screen. It still shows you all the mundane stuff – speed, engine revs, fuel levels and so on – but it can also display media or navigation data in a huge, crystal-clear readout.
Any rivals?

The S4 is undoubtedly brilliant, but it does have some tough competition. Audi's arch rivals, Mercedes and BMW will both sell you some pretty rapid estate cars in the shape of the C 43 Estate and the 340i Touring. Both are competitively priced and offer scintillating performance alongside everyday practicality. They both sound great, too, and the BMW especially is great to drive.

There was a time when fast Audis could go well in a straight line, but struggled when it came to the corners. These days, though, the S4 eats the corners with much more gusto – possibly helped by the decreased weight of the downsized powerplant up front. It'll still understeer if pushed, however, in a way the more balanced C 43 and 340i won't.

The trade-off for this improved handling is a ride that's slightly firmer than you might like, particularly on the standard springs of our test car. Audi says the optional adaptive dampers should help, but we can't vouch for that.

The S4 Avant ticks an awful lot of boxes. It's roomy, well built, subtle and still lightning fast. Sure, a BMW 340i Touring is going to be better to drive and the C 43 Estate will be more comfortable, but as an all-rounder, the S4 takes some beating.

Understated S4 could be all the car you need
Up Next