Wrecked Acura NSX up for auction in US 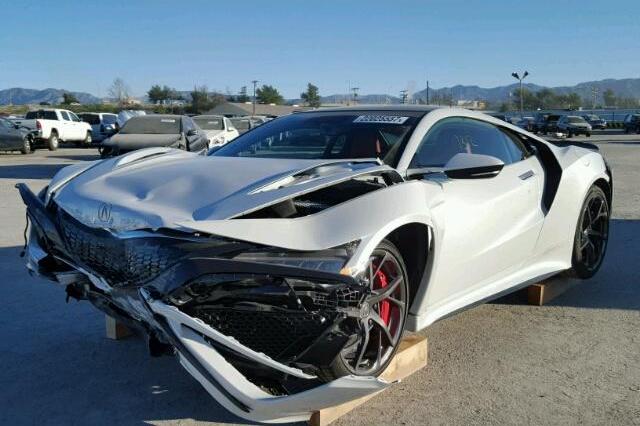 A new Honda NSX supercar is up for auction in the United States for a fraction of its original asking price.

The car, which is badged as an Acura in the US, has just 7,312 miles on the odometer, and bidding for the hybrid supercar is sitting at US$72,500 (£58,232) on motoring website Copart.com.
There is one catch, however, and that's the fact that the NSX was involved in a rather serious crash and will need a serious amount of work – not to mention money – put in to bring it back to its original condition.

The auction listing does say that when the NSX arrived at Copart it was able to start and move under its own steam, so there is some hope for the supercar – which retails at around £143,000 in the United Kingdom – yet.

According to a forum called NSXPrime.com, the owner of the wrecked NSX crashed the supercar while "doing some spirited driving" around Los Angeles and has already ordered a new NSX as a replacement.

Pictures on the auction listing show the NSX suffered heavy damage at the front, as well as some secondary damage at the back of the car. The driver's airbag was also deployed.

In factory condition, the Honda NSX produces 573bhp from its 3.5-litre V6 and electric motors, which is enough to propel the Japanese supercar to 60mph from a standstill in 2.7 seconds, and on to a top speed of 191mph.

Wrecked Acura NSX up for auction in US
Up Next