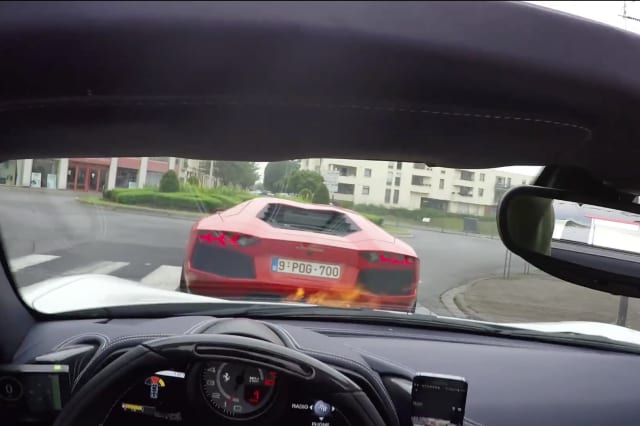 Motoring journalists glibly refer to supercars such as the Lamborghini Aventador as "fire-spitting" but few realise just how true their words can be.

This video from Belgium shows the potential for unexpected danger from such high-powered cars as flames pour from this Aventador's exhaust, prompting hilarious panic from the driver of the Ferrari, who is filming the episode.
As the bright orange flames flicker inches from his white 458 Italia's bonnet, he screams, and peers over the steering wheel for a better look.

It is not known why the Aventador produced such a display of pyrotechnics, but it could be linked to the recent recall in America that saw cars returned to the manufacturer amid fears that an over-filled petrol tank could lead to petrol fumes igniting on the hot exhaust.

Whatever caused the incident, it's a warning not to get too close to high-performance vehicles.