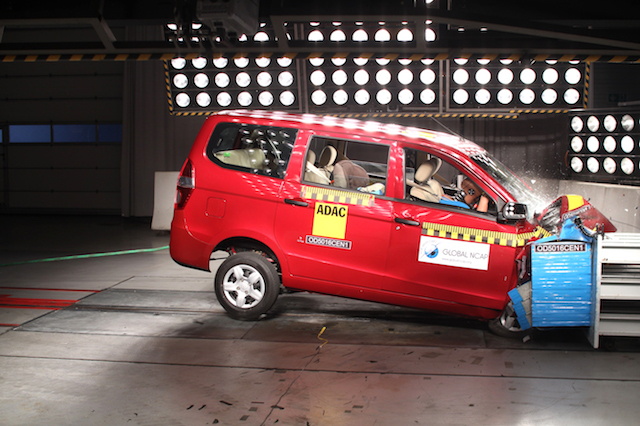 Chevrolet's new Enjoy MPV has slumped to a zero-star crash test score after it came out without airbags in entry-level models.

The low-cost people carrier has been built for the Indian market, and CarBuzz reported that the manufacturer claimed the car came with "the highest standards of safety". However, the car received zero stars for adult occupant protection in the frontal offset impact test.
In the test, which was conducted at 40mph, Global NCAP noted that the front passenger injuries would have been unacceptable and possibly even fatal.

The Global NCAP report said the car had "dangerous structures in the dashboard" and that "the bodyshell was rated as unstable and incapable of withstanding any further loadings".

Child protection was poor, too, although the two-star rating was an improvement on the adult score. Testers noted that the child seat for a three-year-old was unable to prevent excessive movement during impact, while the installation instructions for the child seats were "insufficient".

David Ward, the secretary general of Global NCAP, said: "We are extremely concerned about the poor result of the Chevrolet Enjoy. There is nothing to enjoy about a zero-star safety score and GM should be embarrassed that they are selling cars with such inadequate levels of occupant protection to Indian consumers."