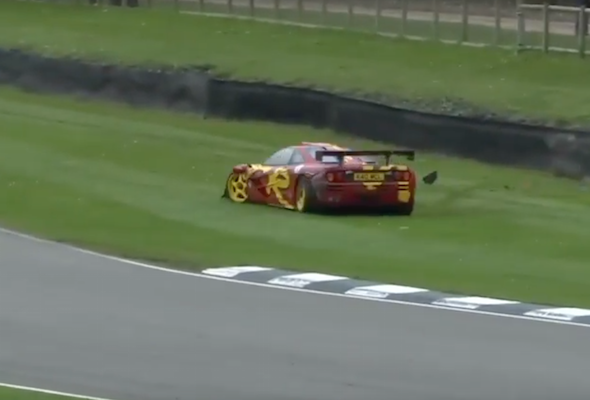 Pink Floyd drummer and avid car collector Nick Mason was left feeling rather red-faced at this weekend's 75th Member's Meeting, which is held at the Goodwood racing circuit, after he lost control of his rare McLaren F1 GTR during a parade lap.

Mason is a renowned collector of powerful and expensive machines, as well as a regular competitor in motorsport events, but it appears the street legal McLaren F1 got the better of him at the weekend.According to reports, Mason took to the circuit for the GT1 demonstration on Sunday - that included other motoring legends, such as the Ferrari F40 and Porsche Carrera GT - but he unexpectedly span into a tyre wall after exiting a corner.

Live coverage of the event showed part of the crash, with commentators discussing a Ferrari F40 when the camera view suddenly switched to Mason crashing.

One commentator can be heard yelling: "Oh my golly! Nick Mason has had a bit of a clang. He lost it in the first part of St Mary's".

Fortunately, Mason, 73, walked away from the incident unharmed but details of the extent of damage to the F1 GTR is yet to be revealed.

According to The Sun, Mason also owns one of the world's best private collections of exotic sports and racing cars including a Ferrari 250GTO which is said to be worth £25million.

Watch a clip of the crash below: