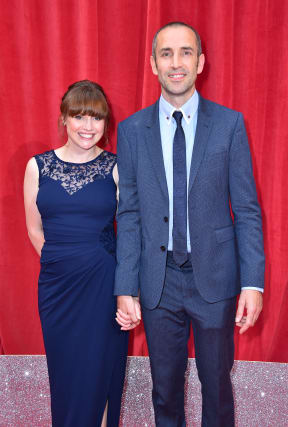 Viewers had a mixed response to the first lockdown episode of Emmerdale, which saw an emotional Sam asking Lydia to have a test for a genetic condition.

The soap premiered a lockdown special episode on Monday, focusing on the life of newlyweds Sam Dingle and Lydia Hart.

Showing the newlyweds’ first month in lockdown, the episode featured many elements of life with coronavirus.

Sam, who was still going out to work before celebrating his furlough, washed his hands after coming into the family home and mentioned that residents in the village were “panic walking”.

He donned a poncho, washing up gloves and goggles for a trip to the supermarket in the episode, which also featured a mention of the weekly clap for carers.

Sam and Lydia, played by James Hooton and Karen Blick, were the only two actors to appear on screen and remained a sofa’s length apart, in an episode filmed with social distancing measures in place.

For example, two-metre poles are being held between cast and crew on the show to ensure they remain the correct distance apart on set, while dot markings on the floor show where people can safely stand.

The episode had its emotional moments as an argument sparked between Sam and Lydia after she left the house to get a wider variety of groceries with a click and collect.

Sam admitted he wanted her to stay in as he was trying to keep her safe because Lydia is at risk for Huntington’s disease.

Huntington’s disease is a genetic neurological condition which gets worse over time, affecting a person’s movements, speech and personality.

The condition is inherited, and a person with an affected parent has a 50% chance of having the disease.

Many people only start to show symptoms of the condition in middle age, and the disease is usually fatal 15 to 20 years after the onset of symptoms.

The episode’s emotional climax came when Sam found his son Samson’s alternative best man speech, reading it aloud and leading a tearful Sam to beg Lydia to have the test for Huntington’s.

Many viewers praised the actors for delivering emotional performances despite the social distancing measures.

Others said the show perfectly depicted the sense of cabin fever and emotions that can run with being in lockdown, as viewers enter the 11th week of restrictions.

However, some viewers said that they watched the soap as a form of escapism and would have preferred a break from thinking about Covid-19.

Filming on the soap was initially halted in March because of Covid-19 but the programme’s cast and crew returned to work in late May.

The lockdown special episodes will be aired from June 8 when ITV will reduce transmissions from three times a week to two, on Mondays and Wednesdays.

This will last for three weeks before the soap returns to its previous broadcast schedule.

Emmerdale airs at 7pm on ITV on Mondays and Wednesdays.

These influencers on TikTok spread a message of body acceptance