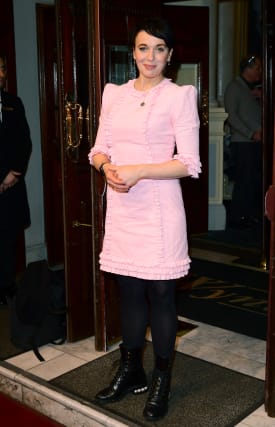 Amanda Abbington has said she felt “sick and terrified” after photographs of baseball bats wrapped in barbed wire were sent to her and her former partner Martin Freeman.

The then-couple, who starred in Sherlock together and are parents to two children, took the pictures to the police and the actress said it was a “really horrible time”.

Abbington now plays the mother of a young man who finds fame on reality television in the BBC Three film Make Me Famous and said she has seen the dark side of social media.

She said: “I hope people will realise we have to treat people carefully. Social media can be a great forum, but it can also be a platform from which people bully.

“I think there should be a rule to say you have to be listed as your real identity on social media and that you can’t hide behind an anonymous one. You can’t say those things to people.

“I’ve experienced some of it myself for example, when my ex-partner joined Sherlock we got pictures of baseball bats with barbed wire wrapped around them sent to us. It made me feel sick and terrified.

“We took the evidence to the police it was a really horrible time.

“So I’ve had some of the worst of it and I hope people will realise how horrible it can be.”

BBC Three’s Make Me Famous, written by Reggie Yates, will be available to stream on BBC iPlayer from 6am on June 17.