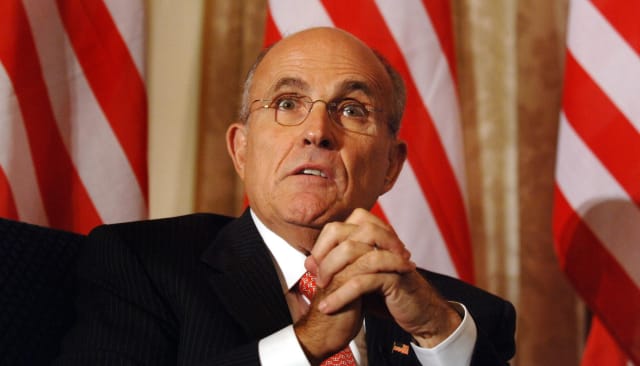 Piers Morgan has called Donald Trump’s lawyer Rudy Giuliani a “rude, obnoxious and offensive guest” after accusing him of swearing on air.

The former New York mayor appeared on Good Morning Britain to discuss Mr Trump’s response to the protests surrounding the death of African-American man George Floyd, and a tweet in which the US president wrote: “When the looting starts, the shooting starts.”

During a video call, Morgan branded Mr Giuliani “completely barking mad”, prompting the 2008 presidential candidate to aim a jibe at Morgan’s short-lived TV career in the US.

Mr Giuliani replied: “You’re the one who got thrown off television here because you had ratings that were about two.

“Don’t tell me I’ve lost anything. I know what happened to your show Piers, I remember the mistakes you made.”

Morgan landed a prime-time chat show slot on CNN in 2011, but his programme was cancelled three years later after falling ratings.

Morgan and co-host Susanna Reid apologised to viewers after they believed he swore, but Mr Giuliani strongly denied that he had used a swear word.

He said: “Now you’re lying again, I didn’t use profanity. That’s exactly what you do to President Trump.”

Later, Morgan commented on a tweet suggesting Mr Giuliani has instead used the phrase “stuffed up” during their exchange.

He wrote: “It’s not clear actually.. many think he said ‘f***ed up’ (as our gallery did in real time), others think ‘sucked up’, & now you’ve decided it’s ‘stuffed up’’… as for apologies, I’m very sorry to any viewers offended by Mr Giuliani being such a rude, obnoxious & offensive guest.”

His death prompted public figures and organisations from the worlds of arts and entertainment to take part in a “blackout” on Tuesday.