Two-metre poles and temperature checks being used to film Emmerdale 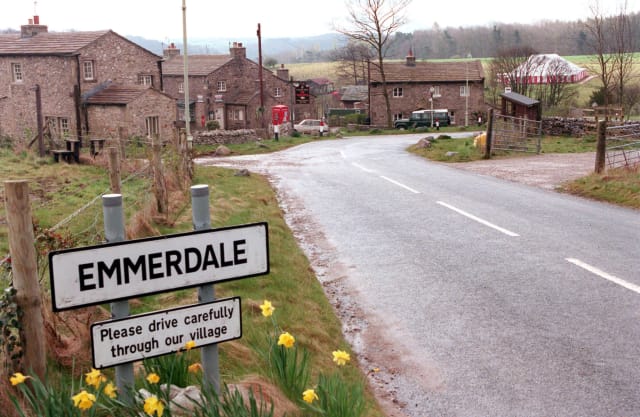 Two-metre poles, hazard tape, face masks and temperature checks are among the measures being used by Emmerdale as the ITV soap returns to filming as lockdown rules ease.

Filming was halted in March because of Covid-19, but the cast and crew returned to work last week, recording a series of episodes about life in lockdown while following social-distancing measures.

Two-metre poles are being held between cast and crew to ensure they remain the correct distance apart on set, while dot markings on the floor show where people can safely stand.

People entering the building are checked for a high temperature and hazard tape divides the set to ensure actors and crew remain separated.

Actors are responsible for their trolley of props, which are sanitised before use, and for ensuring their scripts are not left on set.

Costume and make-up have been removed from set and some cameras have been outfitted with wrap-around Perspex screens.

Instead of characters kissing, they will hint towards intimate moments with looks of intent or by edging towards staircases.

Emmerdale’s producers also hope to point towards fight scenes by showing a character menacingly picking up a weapon.

But some storylines may be held back because they rely on a big fight or intimate affair.

The new episodes will be aired from June 8 when ITV will reduce transmissions from three times a week to two, on Mondays and Wednesdays.

This will last for three weeks before the soap returns to its previous broadcast schedule.

She said: “In an ideal world none of us want to have a break, but nothing has come before safety for us.

“As much as we hope we won’t have a break in transmission, and that is what we are working towards, the message we are saying to all of our crews, cast and editorial team is that safety comes first – and we will not compromise that for anything.”

Ms Hudson said she had spoken to the teams behind EastEnders, Hollyoaks, Coronation Street, New Zealand soap Shortland Street and Neighbours, and they had been swapping solutions.

“People always think that soaps are rivals and we’re not,” she said.

“Myself, (Coronation Street series producer) Iain MacLeod, we have all worked together and I’ve known them for years. We are really good friends, actually.

“It’s just one of those times where, yes, ratings figures are always going to be important, but I just think right now we need to just park them, help each other, work with each other, get back on-screen and then we can get the gloves back on, have a ratings fight when we are all safe and all doing the job we love, and our friends are back working again.”

Coronation Street, another of ITV’s soaps, is set to resume filming within weeks, while the BBC has previously said filming on EastEnders will restart by the end of June.