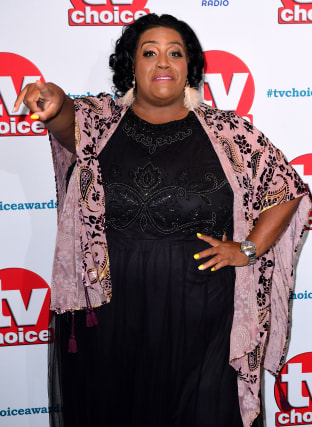 This Morning presenter Alison Hammond broke down in tears as she spoke about how the #BlackLivesMatter movement and the death of George Floyd had affected her.

She appeared after co-hosts Holly Willoughby and Phillip Schofield led a "blackout" in protest against the death of Mr Floyd.

At 11am the ITV daytime show went dark, showing a black screen with the words Black Lives Matter in white lettering.

Speaking over the phone, Hammond, whose parents are from Jamaica, said she was "disgusted to my core" by the image of Mr Floyd before his death.

"I saw everybody's son, and I was disgusted to my core.

"It hurt me to the pit of my stomach to think that this is 2020 and we are seeing that.

"Let's be honest. This has been going on for ever."

Hammond also urged viewers to take part in the "blackout" and educate themselves about the Black Lives Matter movement.

She said: "Don't get offended when I say 'black people' because I'm not trying to offended people. If you are offended by it you need to look within yourself.

"Appeal to your basic instinct of goodness. It's not about all lives matter – obviously we know that. It's all about the fact that if black lives mattered we wouldn't be in this situation now."

She encouraged viewers to "look at #BlackLivesMatter and definitely read more and educate yourself.

"You can donate, you can help black businesses, you have the economical way.

"There are a lot of things you can do. Standing by your black brothers and sisters is so lovely to do because ultimately we are one race. It's called the human race. We need to stand together."

She added: "Lift up your voice, even your small voice if you have a small following. Black out today on Instagram and show you are standing by us out of love."

Famous faces and organisations from the world of arts and entertainment halted business for the day, as the US continues to be gripped by unrest.

Mr Floyd, who was African-American, died last week after a white Minneapolis police officer knelt on his neck for several minutes.

The Rolling Stones said they were taking part with a post on Twitter, sharing the hashtags #theshowmustbepaused and #blacklivesmatter.

It said: "Mick, Keith, Charlie and Ronnie stand with all who object to racism, violence or bigotry."

Billie Eilish encouraged her followers to support the initiative even if they were unable to join protests over fears they may spread coronavirus to their family.

She said: "Don't feel bad for wanting to keep your family safe. but find other alternatives!! here are a few things you can do! if anyone has any more ideas please let me know!"

Ant and Dec shared a short message against a black background on Twitter, writing: "Today we stand in solidarity with the global community challenging racism, inequality and injustice in our society."

Organisers said they wanted Tuesday to be a "a day to disconnect from work and reconnect with our community" through "an urgent step of action to provoke accountability and change".

The BPI, which runs the Brit Awards, pledged to suspend its operations so its staff can "reflect on the recent tragic events" and "stand in solidarity with all those who suffer discrimination".

Demonstrations have broken out across the US following the death of Mr Floyd and other allegations of police brutality against people of colour.

Amid a febrile atmosphere, police have clashed with protesters in cities including New York, Los Angeles and Minneapolis, while Donald Trump has threatened to deploy the country's military unless state authorities stop ongoing demonstrations.

Does wearing a mask pose any health risks?