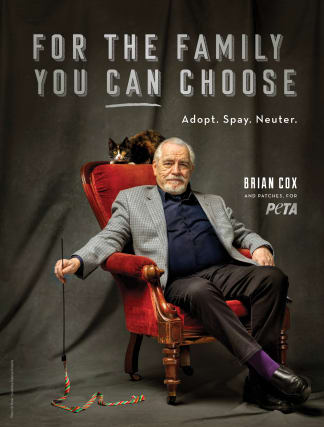 Actor Brian Cox enjoys a comedic back and forth with a rescue cat as part of a campaign encouraging people to adopt a feline pet.

The star of HBO’s Succession, 74, is interviewed by Patches, from the Mayhew animal shelter, in an advert from animal rights organisation Peta.

Golden Globe-winner Cox, from Dundee, asks her whether she is spayed, with the cat replying: “That’s rather personal, but yes.”

He also enquires why she is wearing fur, with Patches replying: “I don’t really have much of a choice.”

The veteran stage actor, who has two adopted cats, assures her he is an advocate of adoption.

He says: “The thing I love about cats is their independence, they can take it or leave it, and that’s their power – that’s their strength.

“They’re very dependable. They have an instinct about what you need, and sometimes you don’t always know, and then a cat comes, and then you go, oh, thank you.”

The advert runs with the slogan “For the Family You Can Choose. Adopt. Spay. Neuter”.

Since filming, Patches has been adopted from the Mayhew shelter.

5 talking points ahead of the Championship’s midweek fixtures