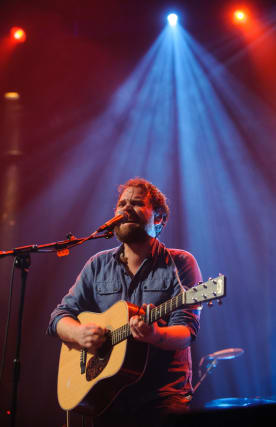 A mental health charity set up in memory of Frightened Rabbit frontman Scott Hutchison has announced an online festival fundraiser.

Tiny Changes was set up by the lead singer’s family and band members after his death two years ago.

The Tiny Gigs fundraiser, over the weekend of June 20 and 21, will include artists such as Tim Burgess, Frank Turner, The Staves and Cloth as well as the Scottish Chamber Orchestra and more.

The live-stream event comes as part of an emergency Covid-19 relief fund from the charity which has supported children and young people’s charities in Scotland.

It aims to highlight the work of charities during the coronavirus pandemic.

During the lockdown, Burgess – best known as lead singer of The Charlatans – has been hosting Twitter listening parties, encouraging people to collectively put on the same album at the same time.

Frightened Rabbit’s The Midnight Organ Fight featured on Sunday May 10, with the singer encouraging people to make donations to Tiny Changes.

Hutchison’s brother and Tiny Changes founding trustee Grant Hutchison said: “At a time when so many of us might be feeling disconnected and isolated from the world, let’s all get together in a virtual field and enjoy some togetherness with a bunch of amazing musicians.

“Instead of feeling like we’re missing out on seeing friends, going to gigs and singing along together, let’s make the most of being able to sit and watch a music festival from our own couch in our pants.

“What started as a wee idea after seeing a bunch of artists perform for folk online has been turned into a reality by a few wonderful folk at Tiny Changes.

“Join in, sing along and then, at the end of the night, you don’t need to fumble around in the dark looking for your tent.”

– Tiny Gigs will be held on Facebook Live at the Tiny Changes page, with people urged to pay what you can on Just Giving.

Focus on Jose Mourinho as Spurs edge to victory