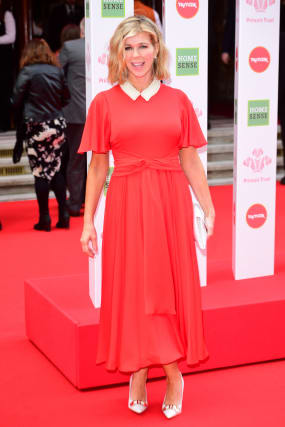 Kate Garraway has said that her husband is still “fighting” as she thanked the NHS staff who have been treating him for coronavirus.

The TV star’s husband, Derek Draper, 52, a former lobbyist and political adviser, was taken to hospital at the end of March.

Alongside a video of her children banging drums during the Clap for Carers tribute to frontline workers, she said that the weekly gesture has been “a source of weekly comfort”.

With Thursday’s clap potentially being the last after organiser Annemarie Plas called for it to stop, Garraway said that she “felt the tears come tonight to think it’s coming to an end before Derek’s ordeal with us”.

She added: “But whether we clap or not next Thursday my eternal thanks to all in the NHS goes on.

“They are keeping Derek alive and every one of them is fighting as hard as Derek is to give us the chance to be reunited.”

Garraway added: “It’s not easy but when I think of how hard Derek is fighting and the bravery of all in the NHS it helps.”

She added that she is “having to find new ways of staying strong everyday” for her children Darcey and Billy “as I know Derek would want me to”.

She said that Billy thought they should “go out in style” by banging drums during the clap.

Garraway has been sharing regular updates about Draper’s condition following the Clap for Carers.