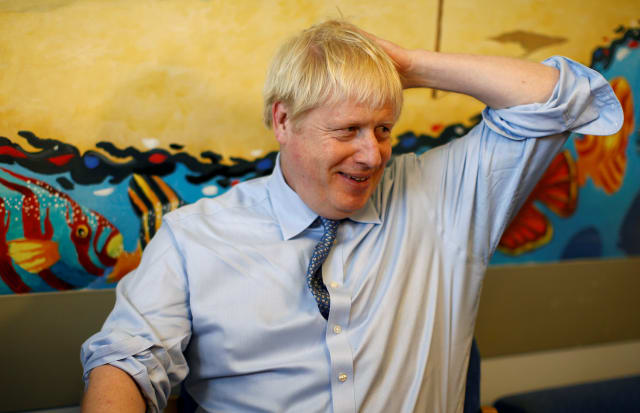 Boris Johnson believes Brussels will blink first in the Brexit stand-off but acknowledged there would be "bumps along the road".

The Prime Minister has rejected demands for the recall of Parliament following warnings that a no-deal Brexit would cause "incredibly serious" economic harm.

He will use face-to-face talks with Angela Merkel and Emmanuel Macron later this week to spell out his commitment to leave the European Union with or without a deal on October 31.

He acknowledged there was "reluctance" in Europe about his demands for the backstop – the plan to prevent a hard border with Ireland in all circumstances – to be scrapped.

"There may well be bumps in the road but we will be ready to come out on October 31 deal or no deal," Mr Johnson said during a visit to Truro.

"Now of course our friends and partners on the other side of the Channel are showing a little bit of reluctance at the moment to change their position.

"That's fine – I'm confident that they will – but in the meantime we have to get ready for a no-deal outcome.

"I want a deal. We're ready to work with our friends and partners to get a deal but if you want a good deal for the UK, you must simultaneously get ready to come out without one."

Fresh concerns have been raised about the prospect of a no-deal Brexit following the leak of a confidential Whitehall dossier on the Operation Yellowhammer contingency plans.

The leader of the Confederation of British Industry (CBI) said it was impossible for firms to be fully prepared for the disruption that would occur following the UK crashing out of the EU without a deal.

But Downing Street rejected the demands, saying MPs had voted for the recess dates which will see Parliament return on September 3.

Michael Gove, the Government minister in charge of no-deal planning, is expected to update MPs on developments when the Commons resumes sitting.

The leaked Operation Yellowhammer papers warned that Britain will be hit with a three-month "meltdown" at its ports, a hard Irish border and shortages of food and medicine if the UK leaves without an agreement.

Downing Street said the leaked dossier was "out of date" and "we are making all necessary preparations ahead of October 31".

A spokeswoman said: "In recent weeks we have significantly stepped up our preparations for leaving the EU across a whole range of areas."

Concerned citizens are likely to be directed to the gov.uk website for more information, with upgrades put in place to cope with an expected surge in online traffic.

Mr Johnson will meet German Chancellor Mrs Merkel on Wednesday and French President Mr Macron on Thursday ahead of his first global summit – the G7 gathering in Biarritz on Saturday.

"He has been clear that there cannot be any actual negotiations unless the backstop goes and that's the message he has delivered to leaders in his phone conversations and he will do that face-to-face," the Downing Street spokeswoman said.

"We have been clear that what the EU needs to understand is that unless the Withdrawal Agreement can be reopened and the backstop abolished there isn't any prospect of a deal."

CBI director-general Dame Carolyn Fairbairn said the Government should focus on getting a Brexit deal because failure would come with a significant cost.

She told BBC Radio 4's Today programme: "I think we can be prepared, we should be prepared, but I don't think that takes away from the fact that what Yellowhammer shows, and I think what businesses have been saying for three years, is that the cost will be really significant for our economy and for jobs and that a deal is the number one priority."

More than 100 MPs have signed a letter demanding Mr Johnson recalls Parliament, and Mr McDonnell said he too backed the move.

"There is a need now to bring MPs back together again because we need time now to really have a proper debate and discussion about this matter," he told Today.

According to the Operation Yellowhammer documents, petrol import tariffs would "inadvertently" lead to the closure of two oil refineries, while protests across the UK could "require significant amounts of police resources" in a no-deal scenario.