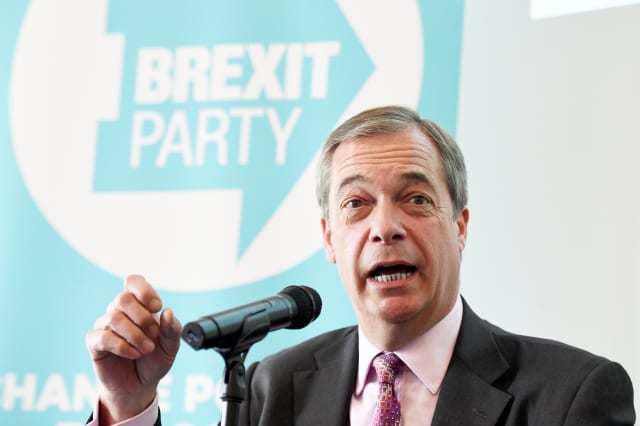 Nigel Farage's Brexit Party has called for an investigation into allegations of impropriety during Labour's slim victory in the Peterborough by-election.

The leader urged an end to the postal votes system in its current form, as party chairman Richard Tice said there had been numerous "rumours" including of "vote-rigging".

Cambridgeshire Police, however, have said no offences have been revealed in respect to one allegation of bribery and two relating to postal votes during its ongoing investigation.

In a presentation at a London press conference on Monday, Mr Tice claimed there is evidence that a "convicted electoral fraudster" had acted as an agent for the Labour Party.

Mr Tice called for "answers" and said his party would lodge a petition under the Representation of the People Act 1983 later this week.

In a presentation to a London press conference on Monday, Mr Tice said there was evidence that Tariq Mahmood had acted as an agent for the Labour Party.

Mr Tice asked: "How much did Lisa Forbes, the elected MP, know that she had a convicted electoral fraudster in her team who would count as an agent?"

Mr Farage said it is time to find out what has happened to democracy.

"Postal votes is a very major part of that," he said.

"It's about a system that is wide open to corruption, to intimidation, to bribery, to abuse on a whole number of levels."

He continued: "If you say it's sour grapes, you can say it, but actually it is time for change and my ambition would be that by the next general election to get rid of the current postal vote system."

Wheelchair users and overseas service personnel are among those Mr Farage suggested should keep the postal vote.

Cambridgeshire Police continue to investigate two allegations – one of a breach of the privacy of the vote and one of the burning of ballots.

But the force has announced that no offences were found over allegations of bribery relating to postal votes.