Woman risks life to rescue dog swept out to sea 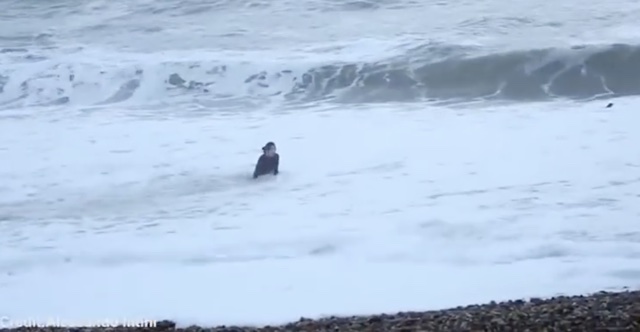 A woman has been filmed risking her own life to rescue her dog after it was swept out to sea in unsettled weather.

The Border Collie disappeared beneath the waves near Palace Pier at the beach in Brighton on Sunday.

SEE ALSO: Mother and son rescued after getting stuck waist-deep in mud at beach

The woman ran in behind her pet in a desperate bid to catch it.

The pair can both be seen struggling in the sea before a huge wave knocks the woman off her feet.

She gets up and seems to have lost the location of the dog before its head is spotted being swept towards her. She manages to grab the dog before another wave loosens her grip.

At this point a member of the public is seen running into view and grabs hold of the dog, dragging it up the beach out of harm's way.

Onlooker Alessando Intini, 41, caught the incident on camera. Speaking to the Metro, he said: "She was very confident going into the water, but after the first wave she was in shock, I think she was very lucky to come out alive.'

Indeed, Chris Ingall, of Brighton and Hove City Council, said the woman could easily have been dragged into deep water. Speaking to the BBC, he said: "If she had been any deeper in, that wave would have come behind her, over the top of her, and pushed her down into deep water.

"Fortunately, the force of the water pushed her back up the beach, otherwise that could have been a very different outcome."

Speaking to the Metro, Jade Cohen, of the Brighton RNLI, said: "People can be tempted to go into the sea because they view their animal as part of the family.

"But in most of the experiences we see normally the dog finds its own way out, especially in this case the dog managed to get further up the beach than its owner.

She added that "it would have been better if she had called the RNLI rather than risk her own life."