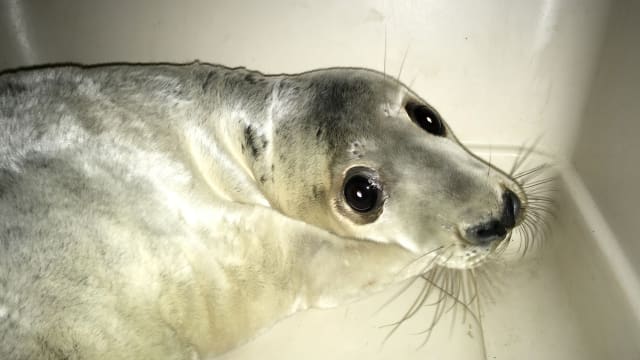 A seal pup has been nicknamed "Miracle" after being rescued when a one-tonne boulder was shifted in South Wales.

The seal was trapped between heavy rocks and boulders by a sea wall near Port Talbot steelworks, an area known locally as Aberavon Pier.

Access to the seal was difficult, and the rescue took significant planning, including detailed consultation with specialist engineers.

A specialist lifting gantry was used to move the heavy rocks and boulders and access to the pup was secured with a grasper before it was placed in a "vari-kennel".

Nic de Celis said: "Without doubt, this was the most technical and complex rescue I have dealt with as an RSPCA inspector. This poor seal pup was trapped amid rocks and boulders, and access to the animal was exceptionally difficult.

"A one-tonne boulder literally had to be moved out of the way, before we safely got hold of the seal and did a thorough welfare assessment.

"Fortunately - despite the ordeal - the seal appears unharmed and is now being transferred immediately to specialist RSPCA wildlife facilities in Somerset.

"We're grateful to the local community for their ongoing concern for this poor seal, which is testimony to how much most people care for animals and their welfare.

"All at the RSPCA are over the moon that we were able to save the seal in what was a bit of a miracle for the seal known as Miracle."

It is expected that the seal will be returned to the wild.