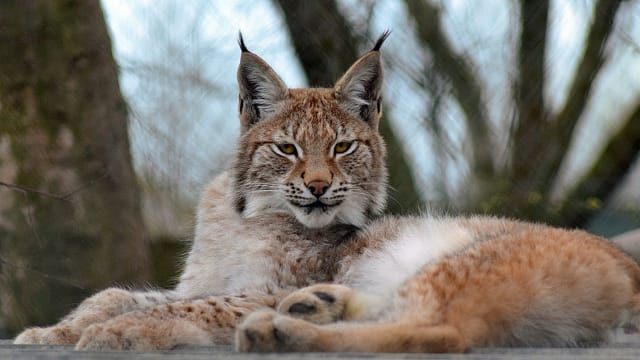 A wildlife park in Wales remains closed as the hunt continues for an escaped Eurasian lynx.

The female, which is around twice the size of a domestic cat, has been missing from Borth Wild Animal Kingdom in Ceredigion since Sunday.

The wildlife park said the lynx, which is called Lillith and is one and a half years old, does not pose a danger to humans but urged members of the public to avoid getting too close.

A post on its Facebook page said on Tuesday morning: "Lilleth (sic) was spotted again last night but still not captured so we will remain closed to the public. We have experts to assist us in our efforts today so fingers crossed."

The animal has been spotted by a police helicopter in the grounds of the zoo, the park said, adding that they hoped the search would be resolved quickly.

The park has said that there have never been any recorded attacks by a lynx on a human, but warned that they were wild animals with sharp teeth and claws and "will attack if cornered or trapped".

The lynx is described as tan and white in colour, with dark spots on her back and legs.

She has a distinctive "thick, stubby tail" which is tan at the base and black at the tip.

The park said lynx can travel about 12 miles a day, but believe she will not go far.

They said they planned to put out camera traps around the perimeter of the zoo and would rely on sightings by the public.

Anyone with information about the missing lynx should contact Borth Wild Animal Kingdom on 01970 871224.